Killing of Protestants in 1922 truce not sectarian, study argues

No justification for deaths of 13 men in Dunmanway and Ballygroman, author contends 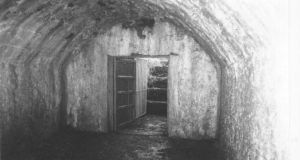 View of Sing Sing, a vault at Kilquane Cemetery, Knockraha, Co Cork, used by the IRA for holding prisoners during the War of Independence. Photograph: Gerard Murphy

A controversial thesis that the killing of some 13 Protestants by members of the IRA in West Cork in April 1922 during the truce was sectarian has been challenged by a new study of the killings.

History teacher Barry Keane has spent the past four years working on Massacre in West Cork - The Dunmanway and Ballygroman Killings in which he examined the killing of some 10 Protestant men in the Bandon Valley and three others in Ballygroman in Mid-Cork.

The killings featured prominently in Dr Peter Hart’s book The IRA and Its Enemies - Violence and Community in Cork 1916-1923 when he concluded in a chapter entitled Taking it out on the Protestants that the primary motive behind the killings was sectarian.

Mr Keane’s interest in the issue stemmed from his BA Thesis at the Geography Dept in UCC, where he examined the decline in the number of Protestants in Co Cork following Independence, and his knowledge of that issue was very much at odds with Dr Hart’s thesis.

“I knew that Peter Hart’s interpretation of that data was wrong from my own research - there was a 43 per cent drop in the Protestant population of County Cork between 1911 and 1926, but some 73 per cent of that drop is directly linked to the withdrawal of the British military in 1922.

“The British army left, their families left, the coastguard, senior members of the RIC, Post Office officials left - in Kilworth Army Camp for example, you would had between 1,000 and 2,000 British soldiers and virtually all of them Anglicans or Methodists or Presbyterians, and all of them left.

“After Independence, business people in Fermoy for example wrote to WT Cosgrave saying they were broke because of the departure of the British Army from the barracks in the town; the last county to rebel against the British - for economic reasons - should have been Cork.”

Armed with his knowledge of the decline of Protestants in Co Cork, Mr Keane began looking specifically at the Ballygroman and Dunmanway killings when 13 Protestants ranging in age from 16 to 82 years were killed between April 26th and April 29th, 1922.

He concluded that while Dr Hart was substantially accurate in terms of the individual events surrounding all of the killings, he believes Dr Hart was incorrect to ascribe a sectarian motive to the killings and instead believe they were revenge killings for the death of a local IRA man.

Cmdt Michael O’Neill was shot dead by Capt Herbert Woods when he entered the home of Capt Woods’s relations, Thomas and Samuel Hornibrook at Ballygroman on April 26th, 1922 and all three Protestant men were later kidnapped by members of the IRA and killed.

Drawing on statements given by IRA veterans to the Bureau of Military History as well as local oral histories, Mr Keane concludes the Ballygroman and Dunmanway killings were best summed up by the testimony of IRA man and later GAA President, Michael O’Donoghue.

“All were Protestants. This gave the slaughter a sectarian appearance. Religious animosity had nothing whatsoever to do with it. These people were done to death as a savage, wholesale, murderous reprisal for the murder of Mick O’Neill,” said Mr O’Donoghue.

Mr Keane believes all 13 were shot in revenge for the killing of Michael O’Neill and because they were perceived to have been hostile to the nationalist cause by elements in the IRA in the Bandon area who were in strict need of control at the time.

He notes that senior West Cork IRA men such as Tom Hales and Tom Barry were in Dublin trying to avert the Civil War and he contrasts the Bandon situation with Skibbereen and Bantry, where strong IRA commanders like Con Connolly and Gibbs Ross kept control.

And he notes: “By no stretch of the imagination can it be suggested that these murders were justified. After all, even if these men had been hostile during the War of Independence, their side had lost; they were the defeated ‘enemy’ if they were the enemy at all.”