Kevin Myers: ‘I have no career left. My reputation is in tatters’

The fired newspaper columnist Kevin Myers has apologised “unconditionally” on 5 Live Daily on BBC radio saying “I apologise for it. There was no justification.” Video: BBC Radio 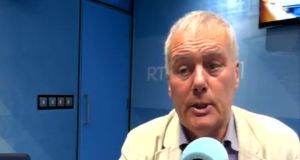 The fired newspaper columnist Kevin Myers has apologised “unconditionally” to the BBC broadcasters Claudia Winkleman and Vanessa Feltz for the contents of a weekend article that has been criticised as being anti-Semitic and misogynistic.

Speaking on 5 Live Daily on BBC radio on Wednesday morning, Myers said: “I retract. I apologise for it. There was no justification.”

In the course of the article, which was about the gender pay gap at the BBC, Myers wrote in reference to Winkleman and Feltz, who are both Jewish: “Jews are not generally noted for their insistence on selling their talent for the lowest possible price.”

“I have no career left. My reputation is in tatters,” Myers added on Wednesday. He claimed that in Ireland there is not the same awareness of anti-Semitism as elsewhere and that his comments were not meant as a criticism of the two broadcasters. “I am a great admirer of Jews. The Jewish Council of Ireland would not have come out in support of me if they thought I was anti-Semitic. I admire Jews because they make the most of what they are.”

He said he was now the subject of a “huge internet campaign” and the reason for speaking on the BBC was to explain the background to what he wrote. When preparing the article he had googled BBC broadcasters. Before that he had not known that the two women were Jewish.

He added that he admired the Jewish talent for making the most of their skills in intellectual and cultural endeavours. The Jewish tradition of honesty, reliability and integrity was why Jewish banks had survived.

His comments were intended as a compliment, not as an insult, but he understood why Vanessa Feltz “didn’t get it” – “It wasn’t her fault.”

Myers said that he was now subject to an “enormous amount of internet hatred” and that the Sunday Times gave him no opportunity to defend himself and fired him without notice.

He added that he now has “no career”, as his Sunday Times column was his main journalistic source of income.

“Lots of Irish people know me and sympathise with me. They know I’m not anti-Semitic. The comments were not about Jews and money. It was about maximising your potential.

“I am responsible. I offer no justification. My career is over. I bitterly regret it. I have a number of failings as a journalist – the throwaway aside. Sometimes it works, sometimes it doesn’t, and this time it didn’t. I would have hoped not to be taken too seriously. The problem is I’m a very poor judge of my own work.”

5 Live Daily’s presenter, Emma Barnett, told Myers that she too was Jewish. He said he had not been aware of that. “It is not an issue that you are Jewish.”

He said in his column he had been referring to the success of Jews “in so many areas of life”. When pushed about how he had not realised that his comments would cause upset, he said he had intended the comment as a compliment. “I have no career left, no reputation. You can add to the situation and make it worse if you wish.”

When asked about a previous article he had written about the Holocaust in the Irish Independent he said: “That headline was not written by me. I have written more about the Holocaust than anyone else in the last 30 years. The entire article was an attempt to show that no single word explains the atrocity of what happened to Jews across Europe at that time.”

A review by the Sunday Times in London of how the controversial article came to be published is expected to be completed later this week. Columns produced for the newspaper’s Ireland edition are read by editorial staff in Dublin, then sent to London for subediting – the checking of spelling and facts, and the addition of a headline – before being returned to Dublin to be read for potential legal problems before publication.

Mr Myers said on Tuesday he believed five or six people would have seen what he wrote before it was published. It appeared in the print version of the Ireland edition of the newspaper, which is not connected to The Irish Times, and was available also online internationally.