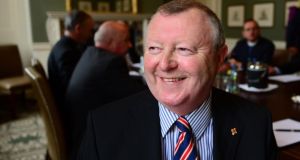 Drew Nelson, grand secretary of the Orange Lodge: “Whatever the outcome of our deliberations as an institution, I would again underline that any actions must be both lawful and peaceful. Our traditions are dear to us and are only undermined by violence.” Photograph: Bryan O’Brien/The Irish Times

Taoiseach Enda Kenny and British prime minister David Cameron have spoken by telephone about the escalating tensions in the North following the Parades Commission decision to ban a contentious parade in north Belfast on the evening of the Twelfth of July.

As Orange Order leaders and unionist politicians plan their “graduated response” to the determination banning Orangemen from parading past the Ardoyne shops on the Crumlin Road next Saturday, the Taoiseach and Mr Cameron spoke yesterday about community and political concerns prompted by the commission’s decision.

The Orange Order is this week holding an emergency meeting of all county and district grand masters to discuss protests against the decision.

Last Thursday unionist leaders pulled out of Stormont talks on parades, the past and flags in protest at the ruling.

First Minister Peter Robinson and Ulster Unionist Party leader Mike Nesbitt, who are co-operating with the Orange Order, also pulled their Ministers out of Friday’s North-South Ministerial Council meeting which was due to have taken place in Dublin Castle. The meeting was postponed.

“The Grand Lodge of Ireland will hold an emergency meeting later this week, which will take place in tandem with our ongoing discussions with our unionist partners,” he said.“Whatever the outcome of our deliberations as an institution, I would again underline that any actions must be both lawful and peaceful,” Mr Nelson said. “Our traditions are dear to us and are only undermined by violence.”

Notwithstanding the calls for a calm and peaceful response, there are still anxieties that violence could erupt during and after Saturday’s return Orange parade, as happened last year.

Mr Kenny and Mr Cameron discussed these concerns yesterday for 10-15 minutes. In the context of heightened tensions and the possibility of violence, a Government spokesman said both leaders agreed that there was an onus on all parties to ensure thatthe situation remained calm in the run-up to the peak of the marching season. The spokesman added that both men had also given their unflinching support for the Northern institutions and all agreements as they existed.

During the course of the conversation, they emphasised that nothing could be resolved without dialogue and that ending dialogue could not provide an answer to any of the outstanding issues.

Sinn Féin Newry and Armagh MP Conor Murphy said the comments of Mr Nelson demonstrated that the Orange Order was “dictating the pace for political unionism”, while Deputy First Minister Martin McGuinness said unionist leaders were “dancing to the tune of the Orange Order”.

SDLP West Belfast assembly member Alex Attwood accused unionist politicians of “playing fast and loose with devolution” in their protests against the commission’s determination. A resolute response was required and the British and Irish governments, together with the US administration, must become centrally involved, he added.