Keeping it in the family: former League of Ireland goalkeeper Craig Hyland is the third generation to join the Dublin Fire Brigade. Video: Ronan McGreevy 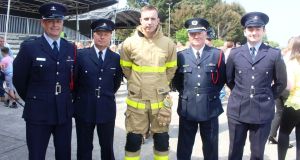 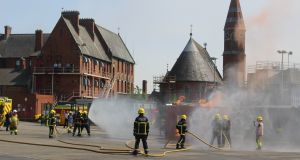 The passing out of the 50 recruits from the Dublin Fire Brigade recruit class 1/2017 was a day of evident pride for all the families and none more so than for the Hyland family.

It was, according to his father Mark Hyland, “the proudest day of my life”. His father, Noel, had been a firefighter who joined Dublin Fire Brigade in the 1970s.

The 50 recruits were chosen from 3,000 applicants. They underwent an interview followed by fitness and aptitude tests. Many had waited for years to join because of the public recruitment embargo.

Dublin’s chief fire officer Patrick Fleming told the families present that though it was a joyous day, it was a sad one for the people of Manchester.

The new recruits gave an impressive foot drill learned on their 17-week course and demonstrated some of their newly acquired skills on ladder rescue, hi line, chemical spillage and road traffic collision scenarios.

Forty-eight of the recruits are going to Dublin Fire Brigade and two to Waterford City and County Council Fire Brigade. The youngest recruit is 20, but most are in their late 20s or early 30s. The oldest is 38.

There were seven former members of the Defence Forces along with paramedics, carpenters, mechanics, plumbers, electricians and personal trainers among the recruits. For the overwhelming majority, the fire service was a complete change of career.

Daren Murphy (35) tried to join Dublin Fire Brigade at 18, but was unsucessful. He spent 14 years in the Army, serving in Libya and Chad.

“I never really thought about it again until I saw the advertisement two years ago,” he said. He won the “silver axe” for best recruit.

Mary Kelly (30) from Dromahair, Co Leitrim is one of two women firefighters from the 2017 class. She worked in London with an emergency ambulance crew. “I applied for this, not thinking in a million years I would get it, but here I am,” she said. “The lads are brilliant. They don’t treat you any differently. They include you in every way.”