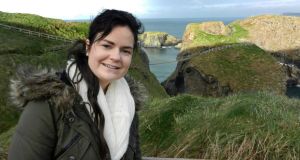 Karen Buckley disappeared from the Sanctuary Nightclub in Glasgow on April 12th of last year.

The first anniversary of murdered nurse Karen Buckley was marked with a poignant ceremony in Analeentha, Co Cork tonight where family, friends and neighbours remembered the vibrant and outgoing 24-year-old.

Karen’s parents John and Marian and her extended family gathered at St Michael the Archangel Church for 8pm Mass.

They remembered a life which was brutally cut short in the worst possible circumstances.

About 200 parishioners attended the church where Ms Buckley made her Holy Communion and Confirmation and where her requiem Mass was held.

Chief celebrant Fr Joe O’Keeffe said Karen was a “gentle soul” who touched the lives of everyone she met.

“We want to remember Karen Buckley, who died so tragically just over a year ago. When we remember someone, that person becomes present. We pray for John and Marian and all those who mourn Karen. It was a horrific and callous murder.

“Our Lord Jesus Christ passed from death to life. We are confident that our sister Karen who believed in Christ has done the same. In this hope we pray.”

Ms Buckley disappeared from the Sanctuary Nightclub in Glasgow on April 12th of last year. She was last seen on CCTV footage leaving the premises with a man.

Her disappearance sparked a citywide manhunt which culminated four days later when her body was found in a remote location in Glasgow.

She was attacked and murdered by Alexander Pacteau, a local man who must serve a minimum of 23 years for her murder.

Her remains were located at a farm in Milngavie, East Dunbartonshire.

Mr Pacteau had tried to dissolve her body in a container full of chemicals.

Pacteau had originally faced a second charge of attempting to defeat the ends of justice by misleading police and trying to conceal Ms Buckley’s body.

The Crown withdrew the charge before his plea.

Sentencing 21-year-old Pacteau, Judge Lady Rae said she found it difficult to find the words to describe his dreadful crimes.

Speaking after the sentencing last September, John Buckley said Pacteau’s life sentence would never bring their daughter back but they hoped he would never be released from jail.

Karen’s parents became grandparents for the first time recently when one of their sons became a father to a baby boy. It is understood the baby has brought considerable joy to the mourning family.

Earlier this week, Karen’s friends and classmates in Caledonian University in Glasgow held a special service in her memory.

The personal service was organised by the School of Health and Life Sciences, the faculty where Ms Buckley, a nursing graduate of the University of Limerick, was studying for a Masters in occupational therapy.

Following her death, two books of condolences were set up at Cork County Council headquarters in Mallow and at the Hibernian Hotel in the town where Karen worked as a teenager.

The murder prompted a huge outpouring of grief in Cork and Glasgow. Hundreds of people attended a vigil in George Square, Glasgow days after the murder.