‘Just after I would doze off, I would see myself on the ground with the bull butting me’ 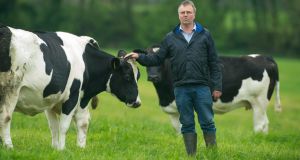 Sitting in the kitchen of his West Cork farmhouse, David Bird recalls the evening he was attacked by a Friesian bull.

The farmer had bought the young bull to service the 60 cows that he milks on his 125-acre farm, at Mayfield outside Bandon.

“I used to get fierce flashbacks for the first six months after the accident,” he says. “Just after I would doze off, I would see myself on the ground with the bull butting me and I trying to hold his head up from me – psychologically that was the only impact, but, physically, it took me nearly two years to get over it.”

David is the fourth generation of Birds to farm at Mayfield on the southern hills overlooking the Bandon river valley and he can trace the farm back through his late father Leslie and grandfather Fred to his great grandfather William, who began farming there in the first half of the 19th century.

But that lineage almost came to an abrupt end six summers ago when, one evening, while moving his Friesian herd to graze on a fenced off section of lush pasture two fields from the farmhouse, the then 49-year-old bachelor was attacked by the bull.

“I had two bulls at the time, an older Angus bull, who was always quiet, and this young Friesian bull – it happened in July and they always say July is the worst time for bulls, because a lot of the cows would be finished and calved so I suppose the bulls would be frustrated,” he recalls

“I opened the gate to go into the paddock and I suppose I just forgot myself – the bull was in with the milking cows and I just looked around and he was beside me. It wasn’t a really hard blow, but he knocked to the ground – he was dehorned, but he kept trying to butt me with his head as I lay there.

“He kept butting me to keep me on the ground and, lying on my back, I was powerless enough but I put my fingers in his nose ring and tried to pull his head up and hold him off as best I could. But it went on for nearly 15 minutes and, in the end, I just got winded and I had to let him go.

“I thought that this was it, I was a goner but I said I would give it one more try and, as a last resort, I stuck my fingers in his nose and squeezed as tight as I could and obviously I must have hit some sore spot and he made a mad jump back and backed off.”

Seeing his chance, David crawled 15 yards to an electric fence and rolled under the fence where he lay for 20 minutes before trying to get to his feet. He managed to walk a few yards before falling to the ground. He crawled another 100 yards and rang for help.

“I rang a neighbour, Billy French, and he picked up another man on the road, Ted Ryan. They came down and found me and rang for an ambulance. I never lost consciousness, but I was badly winded and was in fair pain. They gave me oxygen in the ambulance on the way to hospital.”

David had suffered seven broken ribs, as well as damage to his kidneys and his lungs. He spent five days in hospital before returning home to his elderly mother, Jean.

“I suppose I was out of action for about two weeks. Billy French and another neighbour James O’Brien were very good – they did all the milking for me. They also rang the fellow I got the bull from. He took him back and took him to the factory on the Monday, so he got the road quickly.”

According to the Health and Safety Authority, 197 people died in farm accidents in Ireland between 2007 and 2016. Of these, 26 (13 per cent) involved livestock, with bulls accounting for 5 of the deaths. Cows, heifers and other cattle accounted for a further 17.

“I made a good recovery – the only problem is that I still get some pain in my lower back” says David. “But when I hear of stories of farmers being killed, it brings it all back, lying on the ground. And then I’d think, I survived and they were killed – what must they have gone through or what were they thinking?

“Since the accident, I’ve become very wary of dealing with livestock and my advice to anyone keeping bulls in particular is simple – the minute they see any sign of aggression in an animal, show them the road straight away, because it’s never worth the risk and the consequences can be catastrophic.”

1 David Trimble: After the big dinner in Oslo, somebody said why don’t we party together?
2 Coronavirus: Warning against blame game as 46 more cases are confirmed
3 John Hume, architect of peace process, dies aged 83
4 Two people die after car plunges off road and overturns in river
5 Maureen Dowd: The US president and the damage done
Real news has value SUBSCRIBE