John Lahart: ‘The steps are so much steeper than I had thought’

A strong sense of history heightened my experience of starting in Dáil, says new TD 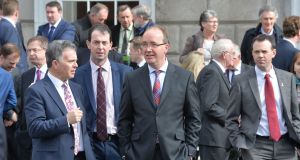 John Lahart with other Fianna Fáil deputies on the plinth during the first meeting of the 32nd Dáil at Leinster House. Photograph: Alan Betson

Walking down Kildare Street, I felt my mobile buzz in my pocket and answered it to receive a warm message of goodwill from one of my predecessors representing Dublin South-West, Charlie O’Connor.

He had one piece of advice – “Just make sure you enjoy the day.”

Passes had been sorted for family and close political friends. In the foyer of Leinster House, preparations for the first sitting of the 32nd Dáil were well under way.

Despite the excitement, the colour and perfume, there was a calmness exuded by the Captain of the Guard and his staff. No request, however trivial, was too much for them.

I have been acutely conscious since my election of the privilege of the office – the trust invested in me as their public representative by my constituents across Dublin South-West, and their expectations of me.

The privilege is theirs to give and theirs to take away. I hope I get time to reward their faith. I had decided to make my way to the chamber early, to soak up the history and the ambience.

As 10.30am approached, more and more deputies filled the seats and I found myself seated behind the Healy-Rae brothers. Directly opposite, the Government benches filled with household names.

Looking down from the public sitting area and being inside the chamber are markedly different experiences. The steps, for one thing, are so much steeper than I had thought.

The colour on the benches was striking: a reflection of a more gender-balanced assembly. I caught my sister Eileen’s eye in the gallery and I felt moved for the first time – thinking of special ones who had passed and who would have loved to witness this day .

Thoughts drift to the history of the Dáil – the past generations who occupied the seats, the dramas that unfolded within its walls. Passing by busts of Ceannt and Plunkett, while casting my first votes as a TD, reinforced that sense.

One of the personal highlights of the day included a small friends-and-family lunch – just a few of the people who had worked so hard to help me get elected. I am still in awe of all their efforts.

The political highlight was taking part in the historic first secret vote for Ceann Comhairle – realising that Seán Ó Fearghaíl is the first holder of the office to derive his authority backed by the strength of a secret vote of colleagues.

Easter looms. In this year of commemoration, I recall how my maternal grandfather walked from Ballyferriter to Tralee to collect his volunteer uniform from Austin Stack.

It was his gesture towards Irish freedom and self-determination.

I wonder what he would make of his grandson, 100 years later, sitting in Dáil Éireann.