Joan Burton retained her seat in Dublin West but the Labour party has seen huge losses across the country. 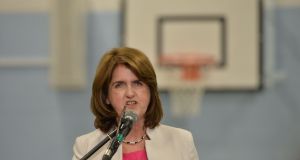 Tánaiste Joan Burton makes her acceptance speech after being elected at the Dublin West. Photograph: Alan Betson/ The Irish Times

Tánaiste Joan Burton has insisted she will not be resigning as leader despite dismal results in general election 2016 for the Labour Party.

Speaking after it was confirmed that she had retained her seat in Dublin West, the Labour Party leader, said while there were a range of possible coalition options, she did not see the Labour Party being involved in the next administration.

Ms Burton said she was disappointed so many of her colleagues who had given huge amount of service locally and nationally had lost their seats.