It’s all very Downton Abbey with British Legion in Coleraine

Many hands shaken as royals work the crowd in town hall 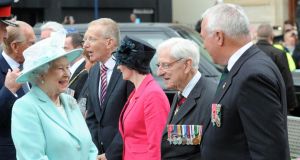 It takes a Cork person. Pat Murray, president of the Cork branch of the Royal British Legion, reduced Queen Elizabeth to laughter when he reminded her of the fishmonger she met on her visit to the English Market in May 2011.

The queen said fishmonger Pat O’Connell had sent her salmon and crab quite recently. The representatives of the Royal British Legion in the Republic reported: “She was in raptures of laughter.”

The queen and Prince Philip had each taken one side of the Coleraine Town Hall, and managed to shake hands with everyone before reaching the top of the hall at the same time.

Now the crowd, with a fair sprinkling of union flags, snaked almost casually round in front of Superdrug and braced itself for rain.

Members of the Macosquin Women’s Institute walked around on the other side of the barrier, dressed in costumes from 1914. The ceremony was a commemoration of the Irish soldiers who served in the British army in the first World War.

“Very Downton Abbey,” said Christine Eastwood, looking at the first World War ladies. Each of them carried a basket containing bouquets of gypsophila, and a black umbrella. They said hello politely to the crowd, but then they kept recognising people they knew. It was a very local affair.

“Oh, there’s Eva,” said Betty Smyth, looking at a lady. “She beat me at bowls. She’s a great bowler.”

“That’s John and Eileen O’Neill,” said Christine Eastwood, pointing out the High Sheriff and his wife. “She’s in our choir.”

Pamela Boyd (82) had her cane propped against the barrier while waiting for the queen.

His friend Patrick Whelan, chairman of the Dublin Central Branch, bore the dusky pink standard of the Old Contemptibles. This had been handed to Noel Cullen some years before.

“I just opened the door of the British Legion office in Dublin and there was this old dear standing there. She said her dad had died and this had been in the attic.”

As the queen laid a wreath at Coleraine’s war memorial, there was a low buzz of chat from a group of middle-aged to elderly ladies, devoted royalists, who seemed to believe they were watching the whole thing on television.

Afterwards, the Coleraine British Legion put on ranks of sandwiches, armies of fairy cakes and regiments of slices of Swiss roll.

“It’s all I’m ever called,” said Helen Mills. She later led a short parade down one side of the dance floor.

“I really enjoyed the day,” said Bill Mills, who used to be in the Grenadier Guards.

“It’s nice to get the North and the South together.”