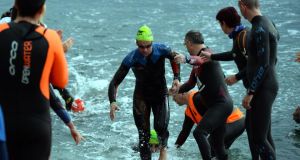 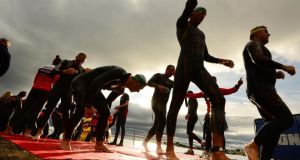 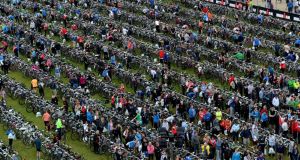 Competitors in Dun Laoghaire prepare their bikes for the start of the Ironman Dublin Triathlon race on Sunday. Photograph: Cyril Byrne /The Irish Times 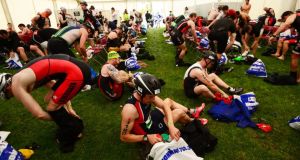 UK sportswoman Susie Cheethman was the first woman to cross the finish line on Sunday with a time of 4.27.09.

More than 2,500 athletes took part in the Ironman 70.3 triathlon through Dublin which kicked off at 7am.

The day-long event began with the first swimming stage of the triathlon in Dún Laoghaire.

The course involves a 1.9km swim at Scotsman’s Bay in Dún Laoghaire, followed by a 90km cycle which goes through Dublin city before looping back to Phoenix Park where the race was concluding with a 21km half-marathon.

About 1,500 Irish athletes, including professionals Kevin Thornton and Robbie Wade, competed on Sunday alongside 1,000 international athletes from 40 countries.

More than half of these athletes were competing in their first Ironman event. The races have also seen a large increase in the number of female competitors, with about 500 women expected to take part on Sunday.

Photograph taken from Air Support Unit of the swim stage from the Iron Man Dublin 2015 taken earlier this morning pic.twitter.com/qru6r1h4Si

Diversions and rolling road closures were in place at various points in Dublin on Sunday to facilitate the triathlon.

Between 7am and 10.15am the bike course was travelling from Dún Laoghaire, skirting Dublin Bay, over the Eastlink Bridge and through the city on the North Quays, before entering Phoenix Park.

Vehicles were prevented from crossing the Liffey between the Eastlink Bridge and the Frank Sherwin Bridge during these hours and drivers were advised to used the M50 instead.

Triathlon Ireland spokesman Scott Graham said the sport had become increasingly popular in this country over the past decade.

“In 2005 we had 800 members, this year we are expecting about 10,250 members. So over the last 10 years it’s been double-digit growth in terms of membership year-on-year.

“And our members are people who are racing multiple times a year, they’re probably doing six, seven, eight, nine, maybe 10 races in a year,” he said.

Blackrock: Between 5am and 10am there will be no vehicle access into Blackrock. The bottom of Craysfort Road and Mount Merrion Avenue will be shut.

Booterstown: The bottom of Booterstown Avenue will be from 5am until 10am with pedestrian access only to the Dart station.

Dun Laoghaire: There will be full access to Dun Laoghaire town but no access to the Harbour between 4am and 9.30am. The transition from swim to bike takes place on the green at Marine Parade and local swimmers are advised to use the Forty Foot bathing area between 6am and 9am.

Dunboyne: A section of the R149 / L2222 / Rooske Road will be fully closed to traffic between 8am and 12 noon. For the Dunboyne to Maynooth diversion drivers should travel east towards Clonee and take the R147 towards Dunshaughlin, turning onto the R154, L2210 and R158 for Kilcock.

Kilcock: Sections of the R125 through Main Street and onto the Kilcock Road towards Maynooth will be closed between 8am and 1pm.

Maynooth: Maynooth town is generally unaffected but drivers will not be able to exit the town on the Kilcock Road and should instead use Parson Street/ Newtown Road if travelling west.

Sandymount: There will be no access on to Strand Road and Beach Road between 6am and 10am.

Summerhill: After leaving Dunboyne the course continues along the Summerhill Road until the junction at the R125 taking a left towards Kilcock. Cars travelling south along R125 will be able to turn right onto the R156 at this junction and will be able to access the M4 or Kilcock via the R407.

Victims of Libyan sponsored IRA attacks compile report for compensation 12:24
Covid-19 Vaccine Tracker: What's available in the Republic of Ireland and what else is coming? 12:15
Woman who took High Court case released from hotel quarantine 11:07
Teenage girl (18) jailed for a year for her role in petrol bomb attack 11:05
Covid-19 vaccine registration system to open for 65-69 year olds tomorrow 10:32