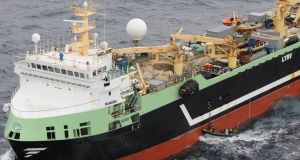 The Irish Wildlife Trust appealed to Minister for the Marine Simon Coveney to seek to have an independent observer placed on board the Dutch-owned “supertrawler” MV Margiris, which has been fishing off the Irish coast.

The 143m vessel, one of the world’s largest supertrawlers, was expelled from Australian waters under pressure from environmental and fishing industry groups.

The Lithuanian-registered vessel has a quota to fish off the Irish coast – as it did last year, when it was inspected in March 2014 by a joint Naval Service/Sea Fisheries Protection Authority (SFPA) boarding team.

The wildlife trust is particularly concerned about the impact of the vessel’s fishing activity on “by-catch”, which can include marine mammals, such as whales and dolphins, as well as sharks and turtles. Fishing industry groups are concerned about any possibility that it has a by-catch of mackerel and herring when its quota is for scad.

Pádraic Fogarty, chairman of the trust, says it has written to Mr Coveney and the SFPA, pointing out that an EU council regulation states: “independent observations of fishing activities are essential to provide reliable estimates of the incidental catch of cetaceans [marine mammals]” and it is “necessary for monitoring schemes with independent on-board observers to be set up”. The Naval Service said it is monitoring the vessel, as it would with any vessel fishing in Irish waters.