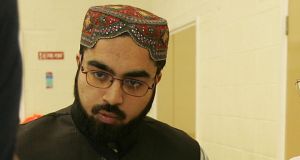 Dr Umar al-Qadri: described the perpetrators of violence in France, Pakistan and Nigeria as being the “biggest blasphemers of all” and anti-Islamic.

The al-Mustafa Islamic Educational and Cultural Centre is at the back of a garage in a large industrial estate. It is a peripheral location in west Dublin. If Irish Muslims are feeling isolated given what is happening in their name elsewhere, they were told at Friday prayers this week not to be afraid to speak out.

The congregation heard a fierce denunciation by their imam, Shaykh Dr Umar al-Qadri, of what was being done in the name of their religion. He described the perpetrators of violence in France, Pakistan and Nigeria as being the “biggest blasphemers of all” and anti-Islamic.

The Prophet Muhammad had condemned extremists in his own time and warned there were those who had the appearance of Muslims who often perpetuated the foulest deeds themselves. He had described extremists as the “gods of hell”. The prophet had been mocked and insulted, but had never resorted to violence, he pointed out.

Dr al-Qadri said Muslims must accept that there was a problem with extremists hijacking their faith. There was no point in blaming the United States or the Jews because Muslims themselves were the greatest victims of extremists.

He referenced the killing of 140 children in Pakistan recently by the Taliban and the indiscriminate shooting of civilians by Boko Haram in Nigeria as two such incidents.

“We as Muslims must admit and must accept that there is a problem of extremism among Muslims. We cannot deny it – IS [Islamic State], Boko Haram, Taliban, al-Qaeda. After accepting and acknowledging it, then we must put our heads together to do something about it.”

Those who spoke to The Irish Times after the service were equally emphatic in their condemnation of recent events.

Dr Ahsan Alam, a trauma surgeon in Tullamore who is originally from Pakistan, said the most important victims of terrorism were Muslims themselves. “There are more than a billion Muslims. These terrorists bring a bad name to us.”

Naveed Shaik, who is married to an Irish woman, said he grew up in a part of India where tolerance and respect for other faiths were the norm. “They are not Muslims, they are khawarij, these are terrorists. They are not representing true religion.”

Similar sentiments were expressed by all the major Islamic organisations in Ireland which put their name to a statement this week after the Paris killings.

Among those involved in the statement were the Islamic Cultural Centre of Ireland, the Islamic Foundation of Ireland and the Muslim Association of Ireland. “We refuse to allow our faith to be held hostage by the criminal actions of a tiny minority acting outside the teachings of Islam,” they stated. “We extend our deepest condolences to the families of the victims and wish a speedy recovery to those injured.”