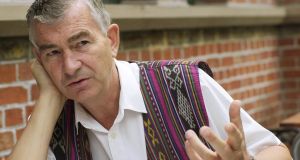 A four-time Nobel Peace Prize nominee has called on developed countries to ban paedophiles and suspected sex offenders from foreign travel in the same way as suspected terrorists.

Father Shay Cullen, an Irish missionary who has been rescuing street children in the Philippines since 1974, said hundreds of thousands of sex tourists travel to the country from Europe, including the UK and Ireland, the US and Australia.

The Columban priest missed out on the Nobel prize last week, but praised the decision to award it to a campaign for the abolition of nuclear weapons.

“The whole moral fabric of society and protection of human rights and the dignity of women and children is breaking down,” Fr Cullen said.

“One thing right now I would say to any government is to pass a law that would ban all convicted sex offenders from travelling abroad. That would be a very good thing they could do.”

“Why not? The international and Irish sex tourists, why are they coming here raping our children?”

The missionary’s Preda Foundation (People’s Recovery, Empowerment and Development Assistance) has helped vulnerable children in the Philippines for more than 40 years.

Independent TD Maureen O’Sullivan is examining if there are constitutional blocks to revoking passports of known or suspected sex offenders.

The UK has official counter-terror orders, which can force restrictions on overseas travel.

In the last year, Fr Cullen has been an outspoken critic of Filipino president Rodrigo Duterte’s war on drugs that has left about 8,000 people dead, about half of whom are characterised as “drugs personalities”, while the deaths of others are unexplained.

“I hope the nomination of the Nobel Peace Prize will highlight our work on human rights and protecting children and protecting young people from the death squads,” Fr Cullen said.

Based in Olongapo city, the missionary also rescues children detained illegally in jails and victims of human trafficking.

Speaking from the Preda Foundation offices, he described life in the Philippines.

“The abuse of children at this extent is terrible — incest is growing here because of the sex tourism.”

Fr Cullen welcomed his own Nobel nomination, put forward by a committee in the German Bundestag, but he heralded the decision to award it to the International Campaign To Abolish Nuclear Weapons.

“My God, it brings up the debate of weapons of all kinds, and war and killing and murders that’s going on in Yemen, Syria and the threats, including from North Korea, ” he said.

“It’s amazing. It’s good that they got it and not some big politicians.”

There were 318 candidates for the Nobel Peace Prize, of which 215 are individuals and 103 are organisations. The identities are traditionally kept secret.

Swedish scientist Alfred Nobel used his will to establish five Nobel Prizes after his death in 1896 with many believing he wanted a legacy beyond “inventor of dynamite”.