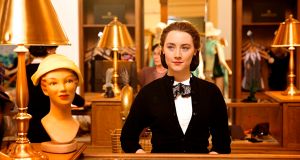 Irish film and television has come of age this year with a number of critical and box office success stories, Irish Film Board chief executive James Hickey has said.

Seven Irish films will be shown at next year’s Sundance Film Festival, the world’s most prestigious independent film festival, with Ireland second only to the US in terms of representation.

The films are Mammal, Love and Friendship, The Land of the Enlightened, Viva, The Lobster, Sing Street and A Coat Made Dark.

Sing Street is directed by John Carney, who also directed the hit musical Once.

It will open the 2016 Audi Dublin International Film Festival.

“For a country of our size, the scale of participation in Sundance is incredible,” Hickey said.

Both Brooklyn and Room have been nominated for Golden Globes and are tipped to be among the Oscar nominations on January 14th.

Hickey said much of the talent around the Irish film industry was “finally coming to fruition”.

Low-budget films Patrick’s Day, directed by Terry McMahon, and I Used to Live Here by Frank Berry, which dealt with the issue of suicide, have also been critical successes.

“Irish producers and Irish directors are giving audiences wonderfully different films. Irish audiences are able to see a wide diversity of films being made,” Hickey said.

“In the days of My Left Foot and The Field, we would regard it as brilliant if we had one film in the Oscars.

“At this stage there is the mention of three funded by the Irish Film Board – Room, Viva and Brooklyn.”

It has also been a successful year for Irish documentary. The Queen of Ireland, about the life of Panti Bliss, enjoyed the largest opening for an Irish documentary, taking almost €48,000 at the box office.

Hickey said 2015 was a year of good box office takings for Irish films, a feature that has not always been apparent in previous years.

One of the highlights of 2016 will be Jadotville, a film about Irish peacekeepers in the Congo in the early 1960s.

It has been financed and bought by Netflix, and will have both an online and cinema release.