Irish D-Day 50 years on: How decimals put an end to the crown in Ireland

Fears were rife about the change from old money in 1971, but most proved unfounded 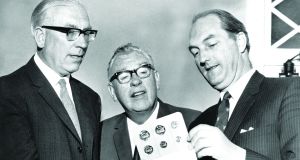 Minister for finance George Colley, right, being presented with a souvenir set of the new Irish decimal coins by Governor of the Central Bank TK Whitaker, left, as Sean F Murray, chairman of the Irish Decimal Currency Board, looks on. Photograph: Gordon Standing

“It was a momentous day,” says Jim Slevin (86) recalling exactly 50 years ago when Ireland eventually ditched an ancient system of everyday currency in favour of decimal notes and coins.

On Monday, February 15th, 1971 – known as Decimalisation Day – hundreds of years of trading in crowns, shillings and farthings was consigned to history. From then on, money would be based more simply on multiples of 10 and 100.

Slevin, who owned and ran Edward Slevin and Company Ltd, a small department store in Ballyshannon, Co Donegal, started by his father 50 years before, recalls anxiety and confusion among customers after opening the doors that day.

“Definitely, people were apprehensive,” he said.

“But we were living in different circumstances, where there was a great shortage of money. The ordinary punter just didn’t have it. People were living very close to the line and trying to rear big families. Life was tough and every penny counted.

“People were used to a system in rural Ireland at that time, had been educated in one currency system their whole lives [and] were finding it difficult to changeover.”

Ireland was late coming to decimalisation, as its currency was then pegged to the UK. The likes of the US and France had been operating decimal currencies since the 1790s.

The new coins were “readily accepted”, according to the Central Bank, which points out a large quantity of sixpences, threepences and pennies that quickly fell into disuse.

But there was consternation among the public, mainly over fears that traders would use the new decimal currency to falsely inflate or round up prices.

In The Irish Times two days before “D-Day”, Jack Jones, general secretary of the Transport and General Workers Union, warned its members to “keep wits about them” and not be duped by unscrupulous retailers.

“For without doubt, thousands of firms and shopkeepers are likely to use the confusion to push up prices – often by as much as double on the smaller items,” he railed.

On D-Day itself, a front-page story reported that “the old and poor were anxious and bewildered”.

“Some certainly got short-changed. Others were so confused, so convinced that someone would defraud them, that they were nervous of going shopping or transacting any business at all,” it stated.

One pensioner told the paper she “will never get used to it”, while another said she was too nervous to go shopping for she might be “defrauded of a shilling”.

However, by the following day the front page was reporting a “smooth passage” to decimal currency with “far less trouble than expected”, according to banks and retailers.

“It passed through relatively easily,” he says. “I think people quickly realised it had been very inconvenient dealing with all these different coins. People would have had their pockets full of half crowns, shillings, farthings, and suddenly found themselves moving to a somewhat easier system.”

As an event, Murphy says there were far bigger monetary shifts coming down the line for Ireland but he suggests the move to decimalisation was a “movement towards Europe” and paved the way for the “far bigger psychological step” of breaking the link with British sterling in 1979.

“It is arguable we didn’t establish a new currency in 1971, because we simply changed the numbers – the pound stayed the pound,” he said.

Lucey was a boy at the time, and his mother ran a pharmacy and bookshop in Waterville, Co Kerry. D-Day was a big day in his house.

“I do remember a bit of excitement around it . I remember for a long time I’d be finding farthings, old pennies and the like. I’d be given a job at the end of the day of sorting out the till contents and I’d have to calculate out the old currency.

“When you think of it, the old system of pounds, shillings and pence was so complicated – people don’t easily divide by 2.4 in their mind to go from 240 old pence to 100 new pence – it is not an intuitive calculation.

“It would be easier now because everything is effectively electronic,” Lucey adds. “You could change currency into Candy Crush emojis now and people would say ‘grand’. In 1971, currency actually in circulation was a much bigger proportion of the overall currency.”

Slevin reckons it took three or four years before all of his customers in Ballyshannon fully grasped the new decimal system. But he looks back on it as a positive development.

“Calculations are so much simpler, for both retailer and customer,” he says.

“In a lot of cases I would say the retailer lost out at the time, because of the odd figures at the end of the calculation. If an item was, say, 10 punts, and you converted it and it came out as £8.66, you’d have to do battle to get the 66 pence, whereas you wouldn’t have in the old currency.

“It was difficult to adapt, but we had to, and we did.”

HOW WELL DO YOU KNOW YOUR OLD MONEY?