Irish consumers do not feel short-changed by rounding policy 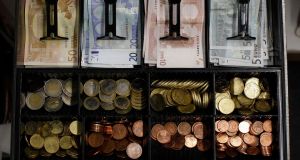 More than 120 million one and two cent coins have been decommissioned since the Central Bank moved to take them out of circulation almost 12 months ago, a new report indicates. Photograph: Michaela Rehle/Reuters

More than 120 million one and two cent coins have been decommissioned since the Central Bank moved to take them out of circulation almost 12 months ago, a report released on Monday indicates.

The report says the vast majority of Irish consumers and retailers have fully embraced rounding, with 93 per cent describing themselves as either positive or neutral about rounding to the nearest five cent cash transactions in shops. For their part, 80 per of retailers have adopted the measure.

The Central Bank also said the rate of public awareness of rounding stood at 75 per cent.

It was introduced last year following a successful trial in Wexford to help reduce the levels of 1 and 2 cent coins in circulation, most of which were not in daily use.

The cost of producing the coins was more than their monetary value and they were being hoarded or even thrown away while inflation had caused the purchasing power of the lower denomination coins to fall by over 20 per cent since their introduction.

According to the Central Bank, the costs of minting replacement coins has fallen since rounding was introduced.

“Rounding is conducted on a voluntary basis for both consumers and retailers, so we’re pleased to see 80 per cent of retailers are applying it and the vast majority of the public surveyed have no issues with the process,” said John Geelon, deputy head of the Central Bank’s payment and securities settlement division.

“The Bank has received lodgements of 126 million unwanted 1 and 2 cent coins, which is a sign that rounding is being embraced.

“Our experience in rounding has been generally positive and we would urge any consumers or retailers who aren’t rounding to try the scheme.”

For rounding to happen, both retailer and the customer must accept it and both retain the right to use exact change.

Rounding only takes place on the total bill, not on individual prices, so existing price points (for example items priced at 99 cent) remain unchanged.

Rounding does not apply when bills are paid electronically, such as by debit card, credit card or by store card.