Irish among most tolerant in Europe, claims EU-wide survey 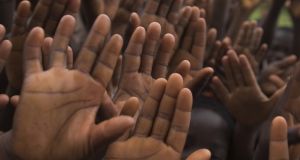 Levels of tolerance are similar in Ireland to the Netherlands, Sweden and Denmark, the most tolerant countries in the EU. Photograph: Getty Images

Irish people are some of the most tolerant in the EU and are becoming more tolerant year by year, a Europe-wide survey has found.

The Irish are now approaching Scandinavian levels of tolerance in relation to people from different ethnic backgrounds and those who are gay.

Levels of tolerance are similar in Ireland to the Netherlands, Sweden and Denmark, the most tolerant countries in the EU.

The survey was carried out in June after Ireland’s marriage equality referendum. It found that some 87 per cent of Irish people agree that gay, lesbian and bisexual people should have the same rights as heterosexual people. The EU average is 71 per cent.

Similarly, 82 per cent of Irish people agree that there is nothing wrong in a sexual relationship between two persons of the same sex compared to an EU average of 67 per cent.

Some 80 per cent agree that same sex marriages should be allowed throughout Europe (the EU average is 61 per cent). This is up 39 percentage points on a September 2006 survey.

The figures are 79 per cent for Asian people (EU average is 69 per cent) and 59 per cent of Irish people are at ease with the idea of their son or daughter having a relationship with a person from the Roma community, above the EU average of 45 per cent.

Most Irish people polled are open to a woman or an older, younger, ethnic minority or gay person in the highest political office in the land, though the questionnaire did not specify whether the office in question is that of the Taoiseach or President.

Though the presidential referendum was resoundingly defeated by a factor of two to one, 65 per cent of Irish people are comfortable with having someone aged under 30 in the highest elected political position, above the EU average of 54 per cent.

Ireland is second highest in the EU in terms of being comfortable with a woman in the highest office in the land (94 per cent). In Sweden the figure is 96 per cent. The EU average is 82 per cent.

The percentage of Irish people comfortable with the idea of gay, lesbian or bisexual people being appointed to the highest elected position in the country at 81 per cent is the third highest in Europe after Sweden (87 per cent) and the Netherlands (85 per cent). The EU average is 54 per cent.

The figure is 49 per cent for those who believe discrimination on grounds of sexual orientation is widespread in Ireland and for 41 per cent on the grounds of religion compared to an EU average of 50 per cent.

More than 1,000 people in Ireland were interviewed for the survey between May 30th and June 8th.

A total of 27,000 people were interviewed across the EU.