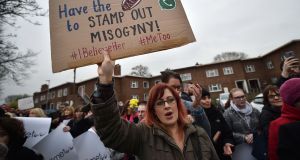 Women’s rights activists have staged a demonstration outside Ulster Rugby’s grounds in south Belfast, saying it should “stamp out misogyny”.

Belfast Feminist Network organised the rally close to one of Kingspan Stadium’s entrances, ahead of Friday evening’s game against the Ospreys, to send a message to sports officials about the responsibilities it says they have.

On March 28th the Ulster and Ireland players Paddy Jackson and Stuart Olding were acquitted of raping a woman in June 2016. Mr Jackson was also cleared of sexual assault.

Since the trial ended there has been a focus on WhatsApp exchanges between the players and their friends, including their fellow rugby player Craig Gilroy.

Mr Jackson, Mr Olding and Mr Gilroy are subject to an ongoing internal review by Ulster and IRFU officials regarding their futures.

Kellie Turtle of Belfast Feminist Network said Ulster Rugby had a duty to “stamp out misogyny” from within its own community. She said the activists had gathered peacefully on Mount Merrion Avenue to highlight wider demands regarding reform of the criminal-justice system and media reporting of rape trials.

They were also calling for more resources for support services for victims and survivors and for fact-based schools education programmes on consent for all pupils. “We want to make sure that there is no institution in this country that can’t be held to account regarding misogyny and sexism.”

As fans poured into what is known as the home of Ulster Rugby, a man wearing an Ulster Rugby jacket and his daughter – who was wearing an ‘I support Paddy Jackson’ T-shirt – stopped by protesters so he could photograph the girl in front of the banners.

Among the estimated 250 protesters holding placards featuring slogans such as “Stand up for the Ulster women too”, “What if it was your daughter?” and “Respect”, one woman activist shouted at him: “Father of the year”.

A 42-year-old woman at the game with her son said: “Fair play to the protesters. I don’t even know how the Ulster review would resolve all this. There are so many strands to it now. It’s difficult to explain to my son about why the women are protesting.”

When she then attempted to explain to the nine-year-old boy that the women were protesting because they want everyone to be treated well, he said: “Then why can’t I get to protest?”

Dan Hollington, from Belfast via London, said: “It’s such a regrettable incident, the whole thing. I know inevitably sport is political, but it’s best to keep things on pitch. It’s a shame for the club it’s been so divisive. I think it’s a shame for this on top. But people are entitled to express opinions. Anything to reduce misogyny in sport or facet of life is great, so I support it.”

Another man said: “I can understand why they are here, but it won’t stop me supporting Ulster.”

Karen Woods from Lisburn said: “I know who they are, but I don’t agree with them being here. The boys were found innocent.”

Men and women in passing cars beeped their horns, apparently in solidarity with protesters.

The Green Party MLA Clare Bailey, a former employee of the Nexus NI rape and sexual-abuse charity, who was at the rally, says she was concerned by how long the review, which has no specific timescale, could take.

“I don’t understand why Ulster Rugby are taking so long with this review,” she said. “The messages and conduct of the players have been in the public realm for some time now. We are outside the grounds now, but next we could be looking at the publicly concerned Ulster sponsors if they can lend weight to a resolution.”

Ms Bailey said she had been heartened by the response from people to the activism of the broader Northern Ireland Women’s Rights Movement since the trial concluded, on March 28th. “The women of Ireland are mobilising,” she said. “They have had their moment. This is not going away, you know. I think the people here tonight are legends.”

Anne Madden from Belfast said she was at the rally “to show solidarity with the many women and men outraged by the behaviour of these high profile sportsmen”. She added: “This case has highlighted depraved views of women that have no place in the 21st century or a civilised society that values all their citizens whatever their gender. Time’s up: it’s time to stamp out misogyny.”

When asked for a response to the demonstration taking place outside its stadium an Ulster Rugby spokesman said it had worked closely with the PSNI and Belfast City Council “to put appropriate measures in place to provide a safe and enjoyable experience for all supporters”.

An advance request from the The Irish Times Northern correspondent for media accreditation to Friday evening’s game was not approved on the grounds that Ulster “have to give priority to sports journalists”.

A follow-up request for access to a seat in a stand nearby the media facilities was also not approved.

As well as the Ulster and IRFU internal review, the Office of the Attorney General of Northern Ireland is investigating possible contempt of court by a juror in the trial of the players who made comments about it online.

There is no set timescale for this either. A spokesman said: “The investigation is still ongoing.”

Goods facilities in NI ports will not be ready by end of Brexit transition period 15:31
HSE winter plan: €1.5bn to be spent on PPE and 12,500 extra staff to be hired 15:09
‘Unconscionable’ for healthcare worker not to get flu vaccine, says Reid 14:58
Irish researchers are developing rapid saliva tests for Covid-19 14:45
Taoiseach says counties must slow spread as Covid-19 rates rise in Dublin, Donegal 14:01