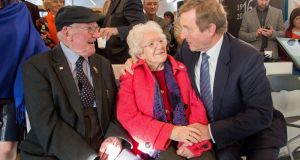 Ireland is in an excellent position to “evangelise” about Europe’s role in promoting peace, tolerance, respect, freedom and dignity, Taoiseach Enda Kenny has said.

Addressing a conference on the 1916 Rising centenary at NUI Galway (NUIG) on Thursday night, Mr Kenny said there was “major work ahead to rehabilitate the political centre in people’s hearts and imaginations”.

“In parts of the world, there is a certain sense of trauma presenting itself as politics,” Mr Kenny said, adding that extremism was growing once again.

“Equally, there is a move to bunker positions where poor perception and opinion, however misinformed, are regnant over facts . . . such desperation, wherever it occurs, must be addressed by the centre, not by the extremes, on either side.”

The Taoiseach said Ireland, unlike mainland European countries, did not have the shared memory of Napoleon, fascism and Nazism.

As Ireland had been largely untouched by old extremism that is “growing once again”, it was in an “excellent position to evangelise on the why of Europe on peace, tolerance, respect, freedom, dignity, things that perhaps we did not imagine we would need to be talking about 100 years after 1916 or two World Wars”.

Earlier, Mr Kenny recalled Patrick Pearse’s role as an educator, writer and “passionate activist” for the Irish language and the Gaeltacht when he marked the opening of a new cultural centre at Pearse’s cottage in Rosmuc, Connemara, Co Galway.

Mr Kenny said Ionad Cultúrtha an Phiarsaigh would serve as a “lasting legacy” as one of the Government’s “major capital projects” for the 2016 centenary programme.

The €4.9 million centre was built by State agencies, led by Údarás na Gaeltachta, after a long community-led campaign.

Residents marked the centre’s formal opening on Thursday with a peaceful protest over the state of the N59 road between Galway and Clifden, noting that when Pearse arrived in the area to examine students in Irish for Conradh na Gaeilge from 1903 onwards he had been able to travel by train.

Mr Kenny said the new interpretative centre gave an overview of the “importance of Irish and of Gaeltacht culture as a rich reservoir of our heritage” and said these elements were “as central to our sense of identity today as they were in Pearse’s era”.

Also speaking at the NUIG conference, Department of Education secretary-general Seán Ó Foghlú said he found the views of one of the Rising’s leaders, socialist James Connolly, to be “particularly insightful” in describing the duty society owed to “citizens of the future”.

“I have no doubt that the education system, and most definitely our teachers within that, are the greatest bulwark we possess against the vicissitudes of national and global challenges,” Mr O Foghlú said.

“Whether we are concerned about literacy, numeracy, the digital age, violent extremism or even Brexit, we must protect and advance the cause of education.”

The conference, entitled 1916-2016: The Promise and Challenge of National Sovereignty, continues on Friday and Saturday with events open to the public.

Registration for events at the national conference is on ireland.ie