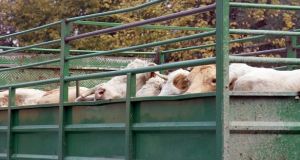 The Department of Agriculture has said it cannot comment on “non-specific” allegations of abuse of animals exported live from Ireland after an investigation claimed some animals had been subjected to abuse, illegal transportation and inhumane slaughter.

Investigators at the Guardian said they had dozens of undercover videos and photographs showing live cattle and sheep from EU countries being beaten, shocked with electric prods, held for days in overcrowded pens and covered head to toe in faeces as they are transported from Europe to their final destinations in Turkey and the Middle East.

At a port in Turkey, footage showed cattle being unloaded from a vessel that had arrived from Ireland after a voyage of almost two weeks, the Guardian said.

“Their hair is thick with faeces from the journey as they are crammed on to a small and open-topped truck to be transported along the next leg of the journey.”

Separately, the newspaper claimed that Romanian cattle travelling unharnessed in the back of an overcrowded truck in the Middle East were shown being thrown violently against the railings, causing clear distress to the animals.

The footage was collected over eight months by campaigners from the Australian animal rights charity Animals International, who worked undercover in Croatia and six Middle Eastern countries to follow animals from their departure at European ports through to destination.

The Guardian said the evidence collected showed clear breaches of a number of European laws in almost every country the campaigners visited.

“At their destination, at least some of the animals are slaughtered in appalling conditions. The footage shows cattle and sheep from France, Romania and Lithuania kicking and flailing violently as their throats are crudely cut or sawed at repeatedly, often in crowded street markets and run-down abattoirs,” it said.

Asked to comment on the allegations in the Guardian investigation, the Department of Agriculture said the State had standards in relation to livestock ships “that go well beyond the requirements of EU legislation, and the Irish requirements are amongst the highest in the world.

“Only ships approved by the department can load cattle for export from Ireland. To date four livestock ships have been approved,” it said in a statement.

“The loading of cattle onto trucks at the various approved isolation facilities is supervised by the Department of Agriculture, Food and the Marine and at that point the animals are inspected and certified as regards health status and fitness for travel etc.

“Cattle on board a livestock ship departing from Ireland are typically bedded and penned in conditions very similar to cattle in any feedlot or shed. Their coats will generally become matted/coated after a period of time. This in itself is not a welfare issue.”

The department said it could not comment on “non-specific issues relating to unidentified cattle”.

The Irish Society for the Prevention of Cruelty to Animals (ISPCA) did not immediately comment, but the organisation is involved with other EU animal rights groups in the Stop the Trucks campaign against live animal exports.

That campaign says the journey animals are subjected to may last several days exposing animals to exhaustion, dehydration, injuries, disease, and even death.

It says the situation is even worse when animals are transported outside the EU, where journeys last “hundreds of hours without interruption and animals face brutal treatment upon arrival”.

Stop the Trucks says a five-year investigation from 2010 to 2015, carried out by Eyes on Animals and TSB/AWF (Animal Welfare Foundation), demonstrated 70 per cent of trucks inspected at the Bulgarian border were breaching the EU Transport Regulation.

“Their teams have found animals starving, without water into a truck parked in direct sunlight for 24 hours, sheep waiting for five days before continuing their journey and standing on carcasses of lambs that were trampled to death.”