Institutes of technology lecturers to ballot for strike action 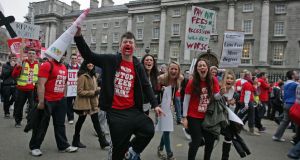 Students march past Trinity College in protest against fee increase and reductions in grants. Academic staff in institutes of technology represented by the Teachers’ Union of Ireland (TUI) are to ballot for strike action over concerns about elements of new legislation being proposed by the Government. Photograph: Eric Luke/The Irish Times.

Academic staff in institutes of technology represented by the Teachers’ Union of Ireland (TUI) are to ballot for strike action over concerns about elements of new legislation being proposed by the Government.

Members of the TUI are already scheduled to stage a one-day stoppage on February 3rd over what the union has described as chronic underfunding in the third level sector, increases in student numbers at a time of falling staffing levels and precarious employment status of many lecturers.

The TUI said on Friday that Technological Universities Bill contained “ significant threats to the institute of technology sector and to the working conditions of the academic staff”.

It said the legislation was “being rushed through the enactment process with reckless haste and without the provision of adequate opportunity for the deep and considered engagement and debate that is required”.

The union said the requirement that institutes of technology must merge before they can apply for technological university status “is more related to rationalisation than to any academic considerations based on the particular missions, values and ethos of particular institutes”.

“The exact rationale for this requirement has never been clearly established and it must be removed from the Bill. ‘Those mergers which are envisaged must be appropriately funded and the regional mission including multiple programmes which is central to the institute of technology ethos must be retained,” it said.

The union said it would withdraw from all talks on mergers with immediate effect.

TUI president Gerry Quinn said he was critically concerned about the potential consequences of the Bill “given the current crisis of underfunding, understaffing and precarious employment in the institutes”.

He said many institutes are struggling “to tread water” as a result.

The TUI represents 4,000 lecturers and researchers in Institutes of Technology. The ballot of members will take place in February.