Inside the strange world of the Church of Scientology in Dublin 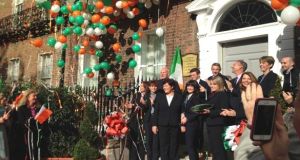 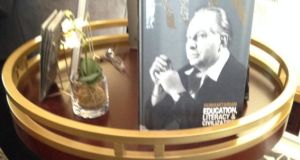 One of the book displays inside National Affairs Office of the Church of Scientology on Dublin’s Merrion Square. Photograph: Emer Sugrue/The Irish Times 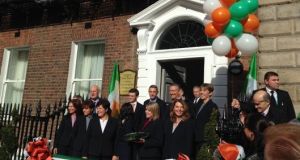 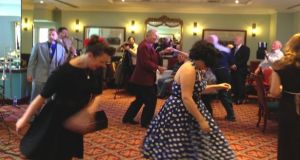 The Church of Scientology opened a new National Affairs Office on Dublin’s upmarket Merrion Square on Saturday, and it was exactly as strange as you might imagine.

I somehow found myself at the launch, almost by accident, through a friend who had received an invitation. Not there as a journalist, I was afforded an interesting insight into the strange world of Scientology and what it hopes to do here in Ireland.

Before the ribbon-cutting ceremony, the church held a party in the Davenport Hotel around the corner from their new office. As I wandered into the lobby feeling more out of place than I have in my life, an American woman with a painfully wide smile greeted me asked me if I was there for the dancing. I was led to a room with food, drinks and a live swing band.

Everyone was beautifully dressed and having the time of their lives. Or so it seemed. It turns out Scientologists are excellent dancers.

Nothing in the room indicated this event had anything to do with Scientology, until you started talking to people. Almost no one in the room was Irish, and it was clear (from an overheard conversation) that many of them had been flown in from the US and the UK for the event. The National Affairs Office staff are all new too, they arrived from their respective countries just last week, according to a number of them I spoke to. Chatting to someone whose business card described them as ‘The Way to Happiness Co-ordinator’, I was told about the plans for the new office. She explained that this would be a secular branch of the church, not trying to convert people but just helping with social issues. She particularly stressed that they would be fighting for our human rights, human rights we don’t even know we have. The room was very loud so I couldn’t get more detail on that.

The Executive Director, whose business card does not have her name printed on it, said later the group would be trying to help with Ireland’s drug abuse and homelessness problems, and urged people to “bring your friends and allies” to the centre on Merrion Square.

The opening ceremony, in front of the Merrion Square property, was nearly normal, except for the number flags and tri-colour themed decorations which could only have been organised by an American. Irish patriotism is more Taytos than flags. Once the ribbon was cut and Merrion Square duly filled with green, white and orange balloons and confetti, I was able to take a look inside.

The building has been beautifully restored using all the original features, but there is no doubt who is in charge. Scientology branded displays are everywhere. There are shelves full of L Ron Hubbard novels and displays detailing Hubbard’s life story, the rules members must live by, the church’s successes and how far they’ve spread themselves around the world cover every wall.

The staff were very welcoming and kind and utterly dedicated to their cause. The evangelism was palpable. It had the same sort of eerie unreality that I’ve only previously experienced while touring the Google offices.

The church has very clearly sized up Ireland’s problems and is keen to employ its methods to deal with them. What exactly that looks look like is less clear.

Saturday’s events gave the impression that the Church of Scientology’s National Affairs Office is on a mission and nothing is going to get in its way.