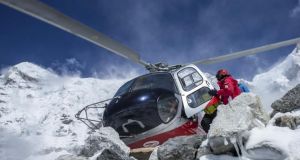 A rescue helicopter is shown at the Mount Everest south base camp in Nepal a day after a huge earthquake-caused avalanche killed at least 17 people, in this photo courtesy of 6summitschallenge.com

The Irish man injured in an avalanche which swept through Everest base camp in the aftermath of the Nepalese earthquake has been flown to Kathmandu, according to the adventure trekking company he travelled with.

Paul Greenan (38), who runs a plant hire company in Dublin, was one of two people who received what have been described as “serious, but non life-threatening injuries” in the avalanche which is reported to have claimed at least 17 lives.

Mr Greenan was a participant in a commercial expedition to Everest run by the British adventure company Jagged Globe of Sheffield. It confirmed that Google senior executive Dan Fredinburg lost his life, while British national Richard Brooks was injured.

Jagged Globe marketing director Tom Briggs said he could not give details of Mr Greenan’s condition, but confirmed that he and Mr Brooks had been evacuated by helicopter to Pheriche and taken from there to Kathmandu.

“We had four groups in Nepal and most of these groups are now descending and making their way to the capital or to Pokhara, but we need to make sure they have international flights,” Mr Briggs said.

“Lack of accommodation, contaminated water and restricted power means that it isn’t feasible to remain for any long period in Kathmandu,whereas conditions in Pokhara are not quite so bad,” he said.

Co Longford climber Paul Devaney, who had hoped to climb Everest as part of a “seven summit” challenge, had a narrow escape when he was just 50m from the full impact of the avalanche when it tore through base camp.

“He was out photographing after the earthquake and saw it coming, and someone grabbed his sleeve and pulled him into a tent,”his brother, Colm, told The Irish Times. “They all then got under tables and whatever was anchored, and stayed there until they felt it was safe.”

Mr Devaney was one of eight climbers with a Nepalese trekking company, and the group have now relocated to Pheriche, where they plan to stay for several days until it is deemed viable to travel to Kathmandu.

“ Everyone is devastated by the loss of life both on the mountain and in Kathmandu and further afield and are thoughts are very much with those who have lost loved ones,” Mr Devaney said in a text statement via satellite phone.

He had abandoned his first trip to Everest last year after an avalanche claimed the lives of 16 Sherpas and led to cancellation of the 2014 season on the Nepalese routes.

Irish mountaineer Ian Taylor, who was leading a trek to Island Peak and Everest base camp, is still in the capital and has been focusing on securing the safety of his clients and Nepalese staff, his wife Laura Gravino said.

His group had not yet left Kathmandu when the earthquake struck, and all are well – as are participants in a separate trip his company had organised which had been due to leave Lukla airport.

“He told me that food is pretty minimal, and they are conserving the water they have,”she said.

Irish climber, writer and broadcaster Dermot Somers, who has participated in many trips to Nepal, said the earthquake’s tragedy “is not about mountaineers, but about the effect on people in an impoverished country, living in very difficult circumstances”.

“The Nepalese have the courage and the spiritual resources to overcome all sorts of devastation and tribulation, because they have to - and have had to in the past,”he said.

“They will absorb this tragedy, too, in the long run, but for now they need all the international help they can get,”he said.

“ Not only do they need medical aid, shelter, food and water, but they have also seen their major spiritual monuments in the Kathmandu valley – both Hindu and Buddhist – wiped out with the destruction of many ancient temples and centres of veneration. This will be a deeply felt cultural shock that will take time to sink in,” Mr Somers said.

“There is also the threat of disastrous flooding if aftershocks disturb the massive glacial lakes that have built up high among the mountains due to glacial warming,”he said.

“For now, we have established that the people we know personally as a result of various expeditions seem to have survived and are facing the immediate future with courage and determination,” Mr Somers said.