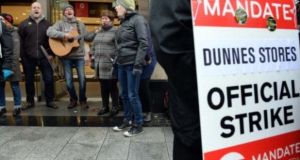 Workers stage a picket outside a Dunnes Stores outlet. Impact trade union expressed solidarity with Dunnes staff who were allegedly punished for taking part in the industrial action.

The motion was passed at Impact’s education division conference on Friday, when Dunnes Stores management was condemned for its “deplorable” behaviour.

Also at the Impact conference in Galway, delegates called on their national executive to seek recognition for female staff who experience miscarriage.

Currently the Department of Education does not recognise miscarriage as a “pregnancy related illness”, delegates were told.

The Maternity Protection Act is “silent in relation to the loss of a child prior to 24 weeks gestation”, Impact Munster special needs assistant (SNA) branch training officer Noreen O’Mahoney said.

She recounted how a school staff member was in surgical theatre during a miscarriage when a phone text was sent from her school asking her to change her medical certificate which had stated she was out on “pregnancy-related sick leave”.

Speaking on a separate motion, criticism of the “two-tier” system of school secretaries was voiced by delegate Marian Jackson.

This latter category of “grant-paid” secretaries was treated as if it was in the public sector when pay cuts were imposed, she said.

A motion calling on the department to “immediately restore” the “unfair deduction” to grant-paid secretaries’ wages was carried at the conference.