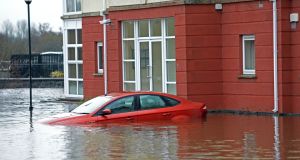 A comprehensive plan to map areas prone to flooding along the River Shannon should be completed much more rapidly than is currently planned, the IFA has said.

The Shannon Catchment Flood Risk Assessment and Management Study was set up by the Office of Public Works (OPW) in 2011 following the floods of 2009.

The study area covers 17 counties and some 20 per cent of the island of Ireland.

The purpose of the study is to map the areas at risk and identify how they can be managed for the future. It is not due to report until the end of 2016.

IFA Connacht regional chairman Tom Turley, who heads the IFA’s flood projects team, described the timeframe for completion of the report as “utterly unacceptable” and said the current flooding is “an environmental national disaster”.

The IFA met the OPW yesterday.

Mr Turley said the OPW did not need a five-year study to know what parts of the Shannon catchment area flooded.

“We know where the areas are,” he said, “the people in the houses who are flooded out know. Just take a satellite photograph. You don’t have to be a genius to know where the flooding is happening.”

He also called for one agency to have the legal power to carry out works without having to go through the current “rigmarole”.

“The Shannon has not been cleaned out,” he added.

The OPW said the study is looking at 300 areas around the country and officials have already met many local communities in towns and villages which are a potential flood risk.

“All possible options or solutions for each area’s flood risk are being developed and in many cases again have already been discussed with communities through a series of local public consultations,” it added.

“Further local consultations on options will be held in early 2016.”

The timeline for the issuing of the flood risk study has also been criticised by Finola Armstrong-McGuire, a Fine Gael councillor in Carrick-on-Shannon, Co Leitrim, which has been affected both by flooding in 2009 and again now.