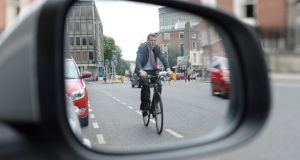 Less than six months into 2017, the number of cyclists killed this year is already at 11.

Cycling Ireland, the cycling governing body, has said more investment is needed to improve Irish roads and cycle lane networks, and new regulations to create a legal minimum distance that vehicles would have to keep when overtaking cyclists should be brought in.

“Currently less than 1 per cent of the Department of Transport budget is spent on ‘smarter travel’ [cycling and walking]. The transport budget needs to reflect the change in how people are travelling. We need this to increase in order to make the roads safer and more user-friendly for everybody,” a spokeswoman for Cycling Ireland said.

Several Fine Gael politicians have brought forward a Bill in the Dáil to introduce “minimum passing distance legislation” for drivers. The legislation would mean drivers travelling over 50km an hour would have to leave a gap of 1.5m between their vehicle and any cyclist they are overtaking. The bill was put before the Dáil in February, by the Minister of State for the Diaspora Ciarán Cannon, and will be voted on in the coming months. The legislation is to “provide a safe passing distance for all cyclists”, said Mr Cannon.

The 1.5m passing distance reforms are supported by the majority of cycling organisations and clubs, and the Society of the Irish Motor Industry (SIMI). Alan Nolan, director-general of SIMI, said motorists should be aware how vulnerable cyclists are on the road. “SIMI is a strong supporter of the 1.5m [passing distance] campaign. It makes sense to ensure that sort of clearance when you are passing a cyclist,” he said.

The new legislation would help cut down accidents involving vehicles overtaking cyclists on the road, but speed and cyclist behaviour are other factors in fatal road collisions.

The Road Safety Authority (RSA) said the speed of the vehicle involved in the traffic collision with a cyclist will be the main factor in whether the cyclist lives or dies from the crash.

A spokesman for the RSA said from previous traffic crash investigations, the “vehicle impact speed” is what usually determines if the cyclist will be killed from the collision.

“If you’re in a car and you hit a cyclist at 50km an hour, it’s a toss of a coin if they live or die,” a spokesman said.

“The message to drivers would be to slow down, and to be aware of giving cyclists adequate space. Cyclists may have to avoid a pothole and may come out further into the road. Drivers need to be aware of that and be cautious passing cyclists,” he said.

But cyclists also need to take responsibility for their safety on Irish roads, according to Verona Murphy, president of the Irish Road Haulage Association.

Drivers of large haulage vehicles have great difficulty seeing cyclists moving behind or passing their trucks, she said. “Cyclists need to be aware of the visibility issues of large vehicles, who don’t have a lot of manoeuvrability,” she said.

Ms Murphy said wearing a helmet should be mandatory, and unsafe practices such as cyclists wearing headphones on the road should be banned. “We’ve seen a vast increase in cyclists on Irish roads in recent years. Everyone needs to take responsibility for making the roads safer,” she said.