Halawa will face mass trial on Sunday two years after arrest at mosque in Cairo, Egypt 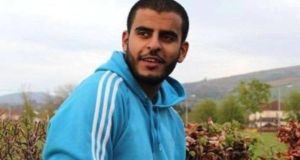 Ibrahim Halawa was arrested in August 2013

The chairman of the Oireachtas Foreign Affairs Committee has been granted permission to meet Irish teenager Ibrahim Halawa (19), who has been detained in Egypt for almost two years.

Mr Halawa is expected to stand trial on Sunday, almost two years after he was arrested. He was arrested in August 2013 at the al-Fateh mosque in Cairo, and is charged with a number of offences including terrorism, murder and use of explosives.

Speaking on Thursday Pat Breen TD said the committee had received a request from Egyptian authorities to send representatives to meet Mr Halawa.

Mr Halawa is facing a mass trial along with almost 500 others although Mr Breen said he hoped Mr Halawa may ultimately face less serious charges.

His trial was adjourned earlier and is scheduled to take place on August 2nd after the Muslim holy month of Ramadan.

The Department of Foreign Affairs says Mr Halawa has been visited 43 times by Irish embassy officials since his arrest.

Human rights organisation Reprieve claims Mr Halawa had been subject to torture while in prison.