Met Éireann has warned that storm-force winds, heavy rain, and very high sea levels may be on the way on Monday as the remnants of Hurricane Ophelia hit Ireland. Video: Met Éireann 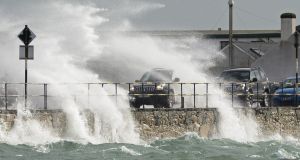 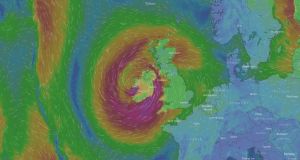 Met Éireann has warned that storm-force winds, heavy rain, and very high sea levels may be on the way on Monday as the remnants of Hurricane Ophelia hit Ireland.

The weather forecasting service issued a weather warning on Thursday evening ahead of the anticipated extreme weather at the start of next week.

On Thursday night, US National Hurricane Center said Ophelia had strengthened into a Category 2 hurricane with top winds rising to 165hm/h (102m/h). It predicted the storm would weaken before it reached Ireland.

Chuck Watson, a disaster modeller at Enki Research in Savannah, Georgia, said on Thursday based on its current forecast track, Ophelia would probably do damage to Ireland worth up to $769 million (€649m).

In a statement, Met Éireann said “a combination of a vigorous Atlantic weather system and the remnants of Hurricane Ophelia will pass close to Ireland on Monday, and has the potential to be a high-impact event in parts of the country”.

“There is a lot of uncertainty as to the exact evolution and movement of this weather system during the coming four days, but storm-force winds, outbreaks of heavy rain, and very high seas are threatened,” the forecasting service said.

“Met Éireann will maintain a close watch on the evolution and issue further advisories and warnings as these are warranted,” the statement said.

Speaking to The Irish Times on Thursday night, Met Éireann meteorologist Jean Byrne said it was “very difficult” to track or predict what path the storm would take over the weekend.

“It does look like it will come very close, or pass over Ireland, so that will have a definite impact in terms of very strong winds, and high seas” she said.

“The latest tracks have it coming very close . . . but the there is still a lot of uncertainty,” she said.

Ms Byrne said the forecasting models find it difficult to track the particular type of extra-tropical storm. She said different models have the storm impacting different parts of the country currently.

Two well-known US computer forecast models were split on Thursday over whether Ophelia would strike near counties Kerry and Cork, said Bob Henson, a meteorologist at Weather Underground in Boulder, Colorado.

The US Global Forecast System keeps the hurricane offshore, while the European Centre for Medium Range Weather Forecasts model takes it into Ireland sometime on Monday. By that point, Mr Henson said, Ophelia’s strongest winds would not be confined to its centre, a hallmark of a storm transitioning from a tropical system to a post-tropical one.

“The wind field will be spread out over a large area and they could get 40- to 50- to 60m/h winds,” Mr Henson said by telephone. “That is enough to cause pretty severe damage, especially in an area where you don’t get winds that strong.”

United Kingdom Met Office forecaster Alex Burkhill said cold sea temperatures mean Ophelia will not be strong enough to be categorised as a hurricane when it hits Britain.

But he added: “It’s definitely something that we are keeping an eye on, for the possibility of some disruptive weather early next week.”