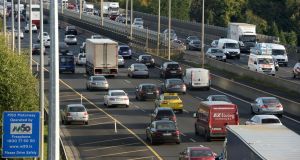 About a million M50 tolls went unpaid by motorists last year, the Fianna Fáil TD Seán Fleming has said after a meeting of the Public Accounts Committee on Thursday.

It heard that despite fines and efforts to recoup unpaid charges, €5.2 million was written off last year, and €4.9 million in 2015. Mr Fleming said that translated to about a million journeys, while a small number of drivers had accumulated hundreds of unpaid trips. “There will always be someone who doesn’t pay up, but I was surprised to hear there were some people who were serial nonpayers, who go hundreds of times a year without paying.”

Addressing how fare evaders are tackled, Transport Infrastructure Ireland told the committee that once fines grew incrementally to €150 they were turned over to enforcement officers. There were about 500 such cases a month, or 6,000 a year. These led to about 2,800 prosecutions in 2016 and to the seizure of 63 cars, whose auction proceeds were then confiscated.