Gardaí seize almost €100,000 worth of cocaine from Sandor Banati 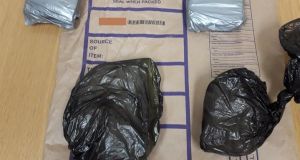 A 38-year-old Hungarian man has been remanded on bail after he was charged in connection with the seizure of almost €100,000 worth of drugs in West Cork earlier this week.

Sandor Banati was charged at a special sitting of Bandon District Court on Saturday with four offences following the seizure of €94,000 worth of cocaine by members of the West Cork Divisional Drugs Unit.

Mr Banati was charged with possession and possession for sale or supply of cocaine at Ballynagrumoola, Ballinhassig on March 7th , contrary to Section 3 and Section 15 of the Misuse of Drugs Act.

Mr Banati was also charged with possession and possession for sale or supply of cocaine at his home at Glasslyn, Bandon, also contrary to Section 3 and Section 15 of the Misuse of Drugs Act on the same date.

Det Garda Shannon Ryan gave evidence of arrest, charge and caution and told Judge John King that Mr Banati made no reply to any of the four charges when they were put to him.

Insp Pat Meany said that gardaí had no objection to bail once Mr Banati was able to provide an independent surety of €5,000 and abide by a number of bail conditions that they were seeking.

Mr Banati’s barrister, Emmet Boyle BL, said that his client had secured an independent surety and he was willing to abide by the various bail terms being sought by gardaí in relation to the charges.

Judge King made it a condition of Mr Banati’s bail that he would reside at his home address and that he would sign on three times a week at Bandon Garda Station.

He also made it a condition of his bail that he would surrender his passport and not apply for any travel documents and provide gardaí with a mobile phone number they could contact him on at any time.

Upon hearing that these terms were acceptable to Mr Banati, Judge King remanded him on bail on an independent surety of €5,000 to appear again at Bandon District Court on March 15th.