Hundreds of Ryanair flights from Dublin to be cancelled

Ryanair has been warned to deliver 'action, not words' by British aviation authorities after it failed to inform 400,000 customers of their full rights regarding cancelled flights. Video: Reuters 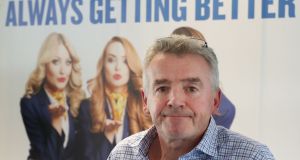 Ryanair has announced the cancellation of 462 flights from Dublin Airport over the winter period.

The airline will cancel 22 flights a week from November 1st until March 24th, a period of 21 weeks. This amounts to the withdrawal of some 87,000 seats .

A Ryanair spokesman said that while the flights are being cancelled the routes will continue. He pointed out the cancellations will mean the reduction in the frequency of flights from Dublin to Birmingham from five flights to four on a Monday. Passengers on other routes will have the option of either rebooking on other flights on the same day or on a day close to the original booking, he added.

On Wednesday Ryanair announced the cancellation of 34 routes for the winter, including the Belfast to London Gatwick route.

The company announced its intention on Wednesday to “slow its growth” by cutting 18,000 flights from its winter timetable as it pulled 25 aircraft from the schedule. A further 10 are to be pulled from its schedule for next summer, it said. The move, a consequence of rostering issues at the airline, will see around 400,000 bookings cancelled on top of the 319,000 that the airline called off two weeks ago.

When it published a list of routes to be cut this winter yesterday, it appeared only one Irish route would be affected – with the airline halting all flights from London Gatwick to Belfast. However, it later emerged that flights to and from other Irish airports were also being cancelled, as passengers started receiving emails with details of disruption to their travel plans. The airline published the list of those flights on Thursday.

The Commission for Aviation Regulation is receiving up to 300 complaints a week from disrupted Irish Ryanair passengers in the wake of thousands of flight cancellations announced in September.

Furthermore, Britain’s Civil Aviation Authority (CAA) chief executive Andrew Haines has said the airline had a “disregard for consumers and for the law”.

He said he was “furious” with Ryanair and accused the airline of only complying with the law when forced to do so.

Mr Haines told Sky News that the authority had been forced to take Ryanair to court in the past and would do so again.

“It is only when we get to the steps of the court very often are they prepared to comply with the law. That is clearly unacceptable.”

Ryanair responded by stating that it will be meeting with the CAA and “will comply fully with whatever requirements they ask us to”.

However the Commissioner for Aviation Regulation in the Republic Cathy Mannion maintains maintains that EU regulations about treatment of passengers who have their flights cancelled is “open to interpretation.”

The British regulator (CAA’s) position is that under EU regulations Ryanair is required to use other airlines to bring people home if their flight is cancelled.

However the issue of enforcement is open to interpretation, she told RTÉ’s Today with Sean O’Rourke show. “Our position is that we can encourage them, but we cannot require them to do so,” she said.

Ms Mannion said that the Irish Commission for Aviation Regulation (CAR) had adopted a different position to that taken by the British Civil Aviation Authority (CAA), but they had come to the same resolution.

Ms Mannion said the Commission would rather work with Ryanair to get them to inform passengers and they had agreed to do so.

She said she also had drawn Ryanair’s attention to their “care and assistance” obligations. “We want to ensure that customers get the correct information.”

She encouraged passengers to retain all receipts and to make a claim to Ryanair. If it was not settled within 28 days then the Commission will step in.

Ms Mannion said she had not been aware that the airline was about to announce more flight cancellations. “We just deal with customers’ rights.”

Ms Mannion said those whose flights were cancelled with less than two weeks notice are entitled to €250 compensation.

“The onus is on everybody - all these passengers - to make a claim to Ryanair for the compensation in addition to any other claim they may make for care and assistance,” she told Newstalk Breakfast on Thursday.

“For example, if somebody was out on holidays and their flight got cancelled, Ryanair would be required to pay for the hotel and the food and the transport”, she added.

Britain’s aviation regulator told Sky News that the authority had been forced to take Ryanair to court in the past and would do so again.

“It is only when we get to the steps of the court very often are they prepared to comply with the law. That is clearly unacceptable,” Mr Haines said.

Ryanair responded by stating that it will be meeting with the CAA and “will comply fully with whatever requirements they ask us to”.

However, Mr Haines said he would take such a statement with a “pinch of salt” as similar assurances last week were disregarded.

“Yesterday (Wednesday), they continued to put out information that wasn’t accurate and was misleading to people. Let’s see action from them not words.”

Ryanair is also under pressure from Britain’s aviation minister Lord Callanan who contacted chief executive Michael O’Leary after the airline announced a new wave of cancellations.

Lord Callanan said: “I am extremely concerned that Ryanair is cancelling more flights and I have made clear my disappointment about the service many of their customers are receiving.

“Despite assuring me there would be no further disruption, it is alarming that Ryanair has announced that more flights will be cancelled. Airlines must fulfil their obligations to customers and ensure they are fully compensated when they face disruption, which is why I very much support the CAA’s decision to take enforcement action against Ryanair.

“It is vital the airline does everything it can to communicate fully with passengers and provide those affected with appropriate care and assistance.”

The CAA has written to Ryanair telling it that it will take legal action if the airline does not uphold the rights of its passengers as a result of its decision to cancel 20,000 flights between now and Christmas.

He said Mr O’Leary’s statement at a recent press conference that he was not going to pay for Ryanair passengers to fly on other airlines was against the law.

“The law says he must do that (put them on other airlines) if that’s the best way for passengers to get back,” he said.

“I don’t believe that they have made a commitment to comply with the law. We made it clear to them that their behaviour thus far is unacceptable.

“We are expediting this under a fast track process because of the many hundreds of thousands of people who are involved.

Mr Haines said he had written to Ryanair pointing out that it had falsely claimed it did not have to re-route passenger on other airlines, particularly when there are no other services available.

“The law says that the consumers are well protected in these circumstances. Consumers should be told well in advance what their entitlements are,” he said.

The CAA had previously taken Ryanair to court in 2011 for publishing misleading fares on its website.

The regulator also took on Ryanair in 2015 when they failed to compensate passengers for delays.

Asked on Sky News if he was at his “wit’s end” with Ryanair, Mr Haines responded: “We are furious. We do take action and when we take that action, the airline complies.”

The regulator added that Ryanair also stopped short of providing details on its obligations to refund additional expenses incurred by passengers as a result of cancellations and re-routing.

Those expenses include meals, hotels and transfer costs, the CAA explained.

It failed to correct that information through a public statement despite CAA requests to do so earlier this month, having already seen about 2,000 flights grounded after the company miscalculated pilot leave.

The company has since cancelled an extra 18,000 flights for the winter season in a move that will hit 400,000 customers.