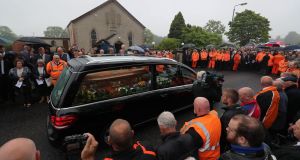 Several hundred mourners including motorcycle enthusiasts from all over Ireland gathered in Ballymoney in north Antrim on Wednesday afternoon for the funeral of William Dunlop.

They assembled, many in their leather riding gear, with the close-knit Dunlop family to pay tribute to the 32-year old rider who was killed during a practice run near Skerries, Co Dublin on Saturday.

His brother Michael, who also was competing in the Skerries 100, was riding behind him when the accident happened.

Mr Dunlop was the son of racing legend Robert Dunlop who was killed in the North West 200 in 2008, and nephew of Joey Dunlop who died in another racing accident in Estonia in 2000.

Mr Dunlop’s funeral was held at Garryduff Presbyterian Church just outside Ballymoney with his interment taking place in the adjoining cemetery where his father and uncle also are buried.

The service was conducted by the Rev John Kirkpatrick, minister of Garryduff from 1987 to 1993, who has known the Dunlop family for more than a generation.

Mr Kirkpatrick also officiated at the funerals of Joey and Robert Dunlop.

Mr Dunlop is the father of a young daughter, Ella, while his partner Janine is due to have a second child in September.

He was injured in the North West 200 race in May and was forced to pull out of Isle of Man TT races in June. He had indicated after his accident that he was weighing up whether to continue in the sport.