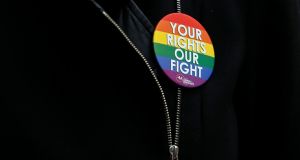 A woman wears a pin during a vigil in central Brussels, Belgium, in memory of the victims of the shootings at a gay nightclub in Orlando, Florida, US. File photograph: Francois Lenoir

Hundreds attended a vigil in Cork on Wednesday evening to show solidarity with the victims of the massacre in a gay nightclub in Orlando, Florida, at the weekend.

Members of the LGBT community gathered to hear speakers condemn the shootings by Omar Mateen and pledge to fight homophobia at home and abroad.

Kate Moynihan, of Lesbians in Cork, said many people now felt vulnerable, but there was also anger at the attack on the LGBT community that took place in the Pulse nightclub.

“Now is the time to stand together, side by side, and say we will not give into fear and hatred - he wins along with all the other bigots if we let that fear take us over,” said Ms Moynihan.

“So be proud, stand tall and keep your hearts open and live the best lives you possibly can and let’s be clear - we will never ever be forced back into the ghetto or back into the closet by anyone.”

Current Ms Gay Cork, Stephanie Fogarty, said it was shocking to think that “49 amazing, beautiful people” had been killed because of their sexuality, but people should be proud of who they are.

“When I was preparing this, I was telling myself I was fine, but when we were reading the names and the ages of those who died - they were 18-years-old up to 50-years-old - it was so cruel,” she said.

“But keep fighting - we are who we are - we are LGBT - we are a community and we are a family and don’t ever let anyone say you are not beautiful because of who you are and who you love.”

Dave Roche, of the Cork Gay Project, said the attack on Pulse was an act of terror, but that terror was nothing new to the LGBT community.

He urged people not to be intimidated by homophobia.

“Terror is nothing new in our communities - we have been terrorised for centuries - terrorised by our State, by our religious institutions and by our culture,” said Mr Roche.

“We have had the need to create our own spaces, places where we can kiss and dance and just be ourselves - sanctuaries in fact - and these places have existed throughout time and all over the world.

“You can’t coerce them out of existence and for a sanctuary like Pulse to be violated like that is the most shocking thing, but we will not be intimidated - we are stronger than terror and homophobia.”

The vigil also saw Emer McCarthy singing John Lennon’s Imagine and volunteers reading out the names of the 49 victims of the attack, before hanging ribbons with their names on trees.