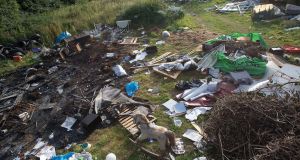 Rubbish dumped at a site in Charlesland near Greystones beside a leisure centre. The site contains household refuse, furniture, tyres and other assorted waste. Photograph: Dave Meehan/The Irish Times

Up to 100 tonnes of rubbish have been found on an illegal dump in the Charlesland area of Greystones, according to a local councillor. Nicola Lawless said hundreds of tyres, window frames and household waste in “dozens” of black plastic sacks had been dumped on the site. Some of it had been deposited months ago, but other piles of waste had clearly been left there recently.

Illegal dumping is causing concern in several parts of the country. A dead horse, the bank statements of a Dalkey resident, household waste and builder’s rubble have been found dumped on roadsides and in illegal dumps in recent days.

The Greystones site is on ground rising from the entrance to Charlesland sports track. Vehicle tracks indicate it was heavily used up until very recently. Charlesland, on the south side of Greystones close to the sea, is one of the most established residential areas of the town, and the site of many of its public and private sports facilities.

Local people said they were alerted to the dump by tyres burning last week. Wicklow County Council said a litter warden had spent a number of days on the site and had retrieved a significant amount of evidence.

The council also said a notice under the Waste Management Acts had been served on the owner of the site “to remove the waste and secure the site so that no further dumping can occur”. The council added that all evidence would be followed up with a view to securing prosecutions against offenders if possible.

The body of a foal with its feet tied was found dumped in a ditch at Quill Road near Kilmacanogue a few days ago. Because of the level of decomposition, it is not known how the foal died but gardaí believe it may have died elsewhere and been dumped at the site.

The organisation My Lovely Horse, which cares for abandoned animals, has asked people to get in touch if they have any information about who left the foal in the ditch or how it died.

In Co Mayo, the owners of correspondence found dumped in Ballyhaunis said they had no idea their personal letters would end up dumped in bags of rubbish on a quiet country road in Carrowneaden.

A number of people have been identified by their correspondence. Some have claimed they paid a reputable contractor to remove the waste and they believed it to be going to a licensed landfill. Among the waste was household rubbish, a fax machine and household goods.

The Environmental Protection Agency said all such activity was a cause of concern, whether it involved “fly tipping” – opportunistic, often once-off, dumping in rural areas – or industrialised collecting and illegal dumping.

The agency said it had recently developed an app for phones called “See it? Say it!” by which members of the public could report illegal dumping anonymously.

Once the app is downloaded, for either Android or Apple phones, the user may take a photograph of the illegal dump and press a “submit” button so the photograph and geo-spatial position of the dump is automatically sent to the relevant local authority for investigation.