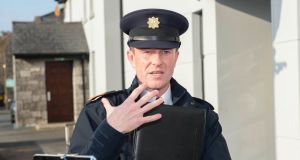 Gardaí investigating the discovery of human remains near Midleton in East Cork are exploring the possibility they may be those of an elderly woman which were exhumed illegally and dumped.

The Irish Times understands that gardaí found a type of crucifix, either attached to the lid of a coffin or placed in a deceased person’s hands, while they also found coffin handles near where the body was found buried in a metre high mound of earth and rubbish.

Those discoveries, in addition to the fact that gardaí have not been able to find a DNA match with anyone in the missing persons database, have led them to look at the possibility the remains are not those of a missing person but of someone who was buried in a cemetery but later dug up and dumped.

On Monday, Supt Adrian Gamble of Midleton Garda Station said a postmortem examination had revealed that the remains were those of a woman, aged at least 70 years, between 5ft and 5ft 2 inches tall, of large frame with dentures and suffering from arthritis.

Supt Gamble also confirmed that the remains are not those of Tina Satchwell (47) missing from her home in Youghal since March 2017. He also told a press briefing that gardaí have found no DNA matches between the remains and women on the Garda missing persons data base.

Gardaí believe the remains were left at the site sometime within the last ten years, he added.

The woman’s skull and other remains were found on January 5th last at an area known as the Shanty Path in Roxborough, three kilometres east of Midleton town, by workmen carrying out clearance work on the planned greenway which runs along the old rail line between Midleton and Youghal.

A white nightdress-type garment was also recovered from the scene.

The Irish Times has learnt that gardaí have spoken to undertakers in the East Cork area to see if they were aware of any family circumstances that might have prompted someone to exhume a body from its original resting place.

Under Irish law, anyone seeking to exhume a body must apply for an exhumation licence from the local authority responsible for the upkeep of the cemetery where the person is buried in keeping with the provisions of Section 46 of the Local Government Sanitary Services Act 1948.

The legislation specifies that exhuming a body without a licence issued by the relevant local authority, constitutes a criminal offence which is punishable by a fine or imprisonment for a period of six months or both.

Supt Gamble said gardaí had begun door to door inquiries in the Roxborough area as they tried to identify the woman’s remains. “Somebody in the community must know how the female remains came to be at this locally known tipping point off the Shanty Path at Roxborough.

“An Garda Síochána are determined to formally identify the deceased and treat her with the respect and dignity that she deserves - we need to provide closure for a family that at this early stage, remain unknown and ensure the remains are brought to a final resting place.”

Supt Gamble appealed to anyone with any information, no matter how insignificant they might think it is, to come forward and contact the National Confidential Line on 1800 666 111, Midleton Garda Station on 021-4621550 or any garda station.