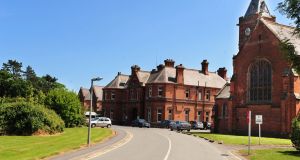 St Ita’s hospital in Portrane, Co Dublin. The PNA said difficulties were experienced there due to the extended overtime ban. Photograph: Aidan Crawley

The HSE has said it experienced “significant challenges” in ensuring a safe service in several mental health facilities in Dublin, Cork and Galway on Wednesday as a result of an overtime ban by psychiatric nurses.

It said it also expected that the situation was “likely to worsen significantly at the change of shift in residential facilities” on Wednesday evening.

Members of the Psychiatric Nurses Association (PNA) have had an overtime ban in place since Tuesday as part of its dispute over pay and staffing issues. However, this was extended to a full 24 hours on Wednesday and Thursday, leading to difficulties being experienced in a number of mental health facilities.

The HSE said it was “continuing to engage and negotiate with the PNA in every location to ensure patient safety is maintained”.

The PNA said there had been issues in a number of locations on Wednesday morning where there were insufficient staff to take up duty and relieve nurses coming off shifts. Some night duty personnel were unable to leave for several hours after their shift officially ended.

The PNA said difficulties were experienced at Phoenix Centre on the North Circular Road in Dublin, at St Ita’s in Portrane, Co Dublin, and in Portlaoise, Mullingar and Ballinasloe.

Meanwhile about 50,000 people are likely to be affected by a third 24-hour strike by members of the Irish Nurses and Midwives Organisation (INMO) as part of a similar campaign over pay and staffing.

The HSE said as a result of the work stoppage all out-patient, in-patient and day surgery appointments scheduled for Thursday had been cancelled.

“Discussions are ongoing with the INMO in relation to securing exemptions to allow for major surgeries, including cancer, to proceed. In the event that any procedures do go ahead patients will be contacted directly by the hospitals,” the HSE said.

It also said that as a result of the strike minor injury units would be closed, and that routine community nursing services and health centre nurse clinics had also been cancelled.

“Public day centres and day hospitals for older people or people with disabilities will close. All planned admissions, including respite and rehabilitation, to public community nursing units and specified centres for people with intellectual disability, have been cancelled.”

There was no indication on Wednesday of any immediate interventions or new proposals emerging aimed at resolving the nurses’ dispute. Informed sources suggested on Wednesday that discussions were still continuing within the Government on new initiatives that could be put forward to try break the deadlock.

The Government has insisted that it will not offer additional payments to nurses, although it said on Monday it was willing to discuss staffing, education and other non-pay issues. Nursing unions rejected this proposal.