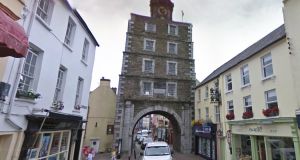 Youghal Clock Gate Tower: the new interpretative centre tells the story of the town from the 1400s to the 1900s. Photograph: Google Street View

It was once a place to be avoided serving as a gallows and jail but on Friday Youghal’s historical Clock Gate Tower opened its doors to welcome visitors. It is hoped the €750,000 refurbishment will boost tourist numbers in the East Cork heritage town.

The Clock Gate Tower was built on the site of Trinity Castle, one of five principal fortifications in late 14th century Youghal. It has had an eventful history which is reflected in the four floors of the building that tell the story of the town from the 1400s to the 1900s.

Despite intermittent repairs, Trinity Gate deteriorated and in 1776 it was demolished and replaced with a gaol complete with a clock and bell.

The Clock Gate Tower’s grim history as a jail is among features highlighted in the interpretive centre which also tells the story, in an audio-visual presentation, of the McGrath family and their experience of living in the tower.

The tower is owned by Cork County Council which has leased it to Youghal Socio-Economic Development Group. The refurbishment was aided by a €200,000 grant from Bord Fáilte which includes the tower as one of its Ireland’s Ancient East attractions.

The phased refurbishment of the building, which began in 2008, also included conservation and restoration work funded by South and East Cork Area Development (Secad) under the European Agricultural Fund for Rural Development and the National Development Plan.

Project manager, Aileen Murray, said: “Our tour involves our wonderful storytellers, dressed as ‘time’, explaining and describing, encouraging participation, inviting questions, listening to visitors . . . We are sure these elements combined will deliver a valuable and memorable . . . experience.”

There will be tours from Thursday to Sunday until April, and then it will open seven days a week until the end of September. Entry is €9.50 each and is by way of guided tour only. See youghalclockgate.ie or call 024-20769.