Higher than expected deposits of gold identified in border counties. 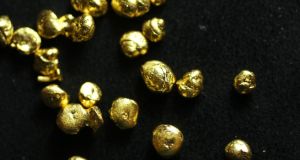 Prof Conroy said there was a million ounces of gold in the Border areas between Monaghan and Armagh. Photographer: Suzanne Plunkett/Bloomberg News

The stony grey soil of Monaghan as lamented by Patrick Kavanagh may be about to yield considerable quantities of gold.

Two announcements have brought the prospect of gold mining to the Border area a step closer.

Conroy Gold and Natural Resources PLC, a company which has been prospecting around the Clontibret area of Co Monaghan, says a technique called Biox, which can separate and isolate gold from the sulphur in the rocks, managed to yield between 87.1 per cent and 90.4 per cent of the recoverable gold.

Viable prospect
The results mean that the prospect of a gold mine yielding 50,000 ounces of gold a year or €70 million worth of ore is now a viable prospect, according to Prof Patrick Conroy, the chairman and founder of the company.

“It shows that the process is viable and now we can go ahead with doing the rest of the work that the technical people have to do so we can submit an application for planning permission and a mining permit,” he said, adding that a gold mine may be up and running in the area by the end of 2016.

Prof Conroy said there was a million ounces of gold in the Border areas between Monaghan and Armagh. “We were told as children that Ireland had no natural resources, but we have enough gold to become a significant producer for decades to come.”

Separately, the Government’s Tellus Border Project announced the results of a comprehensive geological survey of the Border area which found gold, not only in Clontibret and in Glentogher and Glencolumbkille in Co Donegal, but near Kingscourt on the Monaghan-Cavan border, Carrickmacross in Co Monaghan, Killeshandra in Co Cavan, Easky in Co Sligo and several areas of the Inishowen peninsula, and Termon in Co Donegal.

Minister of State for Natural Resources Fergus O’Dowd said the developments had the potential to bring considerable employment to rural areas and the preliminary results which were made available in February had already attracted €1 million worth of investment.

He pointed out that a similar survey in the North which found promising gold reserves has led to €32 million of investment and Ireland’s first gold mine for 2,000 years at Cavanacaw near Omagh.