Higgins may copy plot McAleese used against him in 2004

‘You don’t survive in politics as long as he has without being cute,’ says informed source 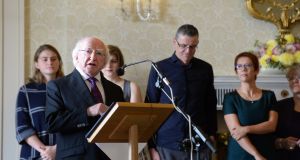 During his long run-up to assuming the leadership of Fine Gael, Leo Varadkar remarked that anything he said or did would be viewed through the prism of his future ambitions.

“I’m just waiting for the moment that I sit on the toilet and some commentator somewhere decides that’s part of some sort of strategy,” the now Taoiseach bemoaned in early summer 2016.

Varadkar was complaining about the fact that a specific policy initiative was being linked to his future ambitions. But leadership was, of course, on his mind.

His complaint may be one that President Michael D Higgins will soon sympathise with. One senior political figure, observing the President at the All-Ireland football final on Sunday, thought he had lost weight and “looked more youthful”, leading to a hunch that he had made up his mind to stand again for the presidency, even though he had promised to serve only one term.

“There is a pep in his step so he knows well he is grand,” said the eagle-eyed source.

Indeed the President has lost weight, according to insiders, and spent much of August walking and exercising, although it is suggested by sources that this could be more to do with preparing for a busy autumn schedule.

But his comments on RTÉ Radio’s Today with Sean O’Rourke at the National Ploughing Championships this week are being read in political circles that the President has decided he wants a second term.

“By the time of the next ploughing, you should have a very, very good idea,” he said. “I have ruled nothing out.”

That timetable leaves Higgins’s official announcement just weeks short of the next presidential election, due in October 2018.

Mr Higgins was asked the same question, by the same radio host, at the same venue last year. The summer silly season also saw a bout of presidential speculation. He chose his words carefully.

“He was clearly prepared for it, yes,” said a well-placed source.

In previous years the President felt he didn’t have an adequate reply to the second-term question and asked his staff to assist him in coming up with an answer.

This week he effectively challenged those who want to challenge him – and who must begin work on fund-raising and securing a nomination in the coming months – to show their hands before he shows his.

It is an outside bet that by the ploughing championships next year, Mr Higgins will have announced he has decided against standing after all. If he decides not to stand, potential candidates will have to be put on notice well before September 2018.

While it is understood that he is largely keeping his own counsel, sources are pointing towards a re-election strategy the President himself directly experienced more than a decade ago.

In early September 2004 the Labour Party thought it had settled its approach to the presidential election due that October. Mary McAleese was the overwhelming favourite to secure a second term and would have the backing of Fianna Fáil, Fine Gael and the Progressive Democrats.

Labour would stand to lose up to €750,000 on a wasted campaign, but Mr Higgins wanted to stand.

It had been widely understood in political circles for months that Ms McAleese wanted a second term but she did not officially announce her candidacy until after the election had been called in mid September.

Days after her announcement, the Labour Party’s National Executive Council officially decided against standing a candidate, the position advocated by then leader Pat Rabbitte.

At the time, Mr Higgins, then a TD, said some of his parliamentary colleagues displayed a lack of “energy and courage” by failing to support his presidency bid.

The truth was McAleese was unbeatable and nobody wanted to waste time or money fighting her. Enda Kenny said he would not stand a candidate against her even if an alternative candidate emerged to force an election.

Informed sources say President Higgins may now be using the same strategy deployed by McAleese. One Labour source agreed with this assessment.

“He is dead right. Why would he want a six-month campaign? You don’t survive in politics as long as he has without being cute. It worked for McAleese.”

Another party figure, centrally involved in 2004, believes Mr Higgins will eventually decide against a run, although this view is not widely shared.

Had he stood in 2004, Mr Higgins would have been beaten. He even acknowledged so himself. The Labour Party did him a favour in keeping him out of the race, thus paving the way for his successful 2011 bid.

Perhaps the President hopes that those mulling a run against him will come to the same conclusion as others arrived at with McAleese: the inevitability of an unbeatable incumbent.