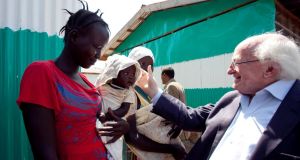 The BBC’s Michael Buerk described the scene there 30 years ago as “a biblical famine in the 20th century” and “the closest thing to hell on Earth”. It drove Bob Geldof into a rage and was responsible for Live Aid 1985. This morning, at the Damayno School in Ethiopia’s Tigray province, President Michael D Higgins marvelled at the change.

“It is wonderful to see how the whole landscape has been transformed by clever watershed management,” he said. “It is difficult to imagine today that what we see now was once so barren that the local community wanted to leave.”

Ireland and Irish Aid, he said, were “proud to be associated with this transformation but most of all I am delighted to see the new hope it has brought to the people of this valley.”

At a dinner hosted by Tigray’s regional president Abay Woldu, Mr Higgins resorted to another poet in expressing his delight at the work of Tigray’s Agricultural Institute, which he visited earlier.

He recalled how there “our discussion on seed multiplication reminded me of Seamus Heaney’s poem ‘The Seed Cutters’, in particular the line ‘The tuck and frill of leaf sprout is on the seed potatoes buried under that straw’.”

It was a poem, he said, which demonstrated “a great sense of harmony and cohesion with the land and of the power of such accord to transcend space and time.” Such a sense of unity was evident, he said, in the way “Ireland and Tigray are working together to develop new technologies to further agricultural production and organisation of land use here.”

At the clinic, whose work is also sponsored by Trocaire, he praised the work of Irish missionaries abroad. “It is widely recognised that Irish missionaries led the way for much of what the Irish Government, through Irish Aid, is now doing in the area of development assistance,” he said.

“Irish Aid’s partnership with missionaries, and in more recent times with Misean Cara, is a critically important part of the Government’s overseas development programme,” he said.