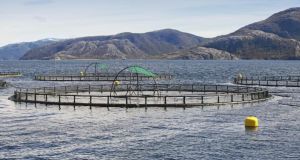 Fish farm with round cages for salmon growing. Marine Harvest says it halted harvesting of salmon in January and February “in an effort to grow the fish”.

Marine Harvest, in its latest quarterly report, says it halted harvesting of salmon in January and February “in an effort to grow the fish”.

The report described Irish conditions as “very challenging”, and said severe storms had affected feeding and the ability to treat for sea lice and disease.

It said two sites were affected by pancreas disease and amoebic gill disease, and high occurrences of jellyfish were reported.

Accumulated losses amounted to over €4 million last year, according to the company.

In hot water
In a statement, the company’s technical manager Catherine McManus said weather conditions were a factor.

“December 2013 to date has been the most consistently stormy period since Marine Harvest Ireland began farming in Ireland in 1979 and this did restrict our staff from getting out to our sites,”she said.

“High sea temperatures in the summer restricted freshwater treatment of some fish as under these conditions, movement of fish can lead to stress,”she said.

“Like the weather, the natural invasion of jellyfish was something out of our control and while it did occur in other countries, the impact was bigger here due to our small production base,” she said, adding that the company intended to resume harvesting by February 17th, weather permitting.

The company employs over 270 people in Ireland at sites along the Atlantic seaboard.

Closed containment
Friends of the Irish Environment said the company’s difficulties were “further evidence that closed containment systems, which are now coming into production around the world, are the only way forward”.

“By separating the farmed fish from the natural environment, disease and parasites can be controlled without adverse effects on other species and the effluent recycled rather than polluting local waters,” it said.