Halliday in protest over honorary degree for Enda Kenny 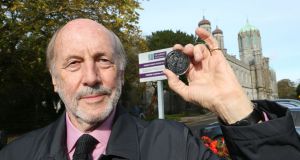 Former UN official Denis Halliday has handed back a medal he received from NUI Galway in protest over the conferring of an honorary doctorate on former taoiseach Enda Kenny.

Mr Halliday, who resigned from his senior post in the UN in 1998 in protest over the impact of sanctions on Iraqi people, hand-delivered a president’s medal he received from the university Literary and Debating Society with a statement to NUI Galway (NUIG) on Wednesday morning.

Mr Kenny was awarded an honorary doctorate of laws by the National University of Ireland (NUI) at NUIG on Monday.

Former taoiseach Brian Cowen was conferred by NUI in July.

In his statement, Mr Halliday said that Mr Kenny had “failed to respond to the concerns of many Irish people who believe in Irish neutrality “.

Mr Halliday said he believed he represented those who supported Irish military participation in UN peacekeeping functions, but opposed the Government’s facilitation of use of Shannon airport by the US military.

Commenting on Mr Halliday’s move, NUI said on Wednesday it was a matter for NUIG but confirmed that two complaints “to date” had been received about awarding the honorary degree to Mr Kenny.

NUIG said it would ensure that Mr Halliday’s statement and medal were forwarded to the student literary and debating society which had awarded same.

NUIG said the decision to award an honorary doctorate of laws degree on Mr Kenny was “made by NUI and was in line with its tradition of honouring those who have held the office of Taoiseach”.

Mr Kenny did not respond to a request for comment.

NUIG’s Literary and Debating Society said it respected Mr Halliday’s decision. It is holding a debate on neutrality on Thursday night.

When former taoiseach Brian Cowen was conferred with an honorary degree by NUI in July of this year, former University of Limerick founding president Dr Ed Walsh said he was returning an honorary doctorate conferred on him in 1998 in protest.

Dr Walsh accused the NUI of “lowering its standing” , and said through “ inept stewardship”, Mr Cowen and his precedessor Bertie Ahern had “brought Ireland to its knees and caused much hardship to its citizens”.

NUI confirmed that Dr Walsh had returned his honorary degree parchment, and said that there had been no further returns of parchments to date in relation to Mr Cowen’s conferring.

Mr Halliday, a holder of the Gandhi International Peace Award for his work in Iraq, has taken a human rights stance on many issues in the Middle East, Sri Lanka, Vietnam and Guatemala among other countries since his resignation from the UN. He has participated in protests over the use of Shannon airport by the US military.

In 1984, the then University College, Galway faced a storm of protests over a decision to confer an honorary degree on then US president Ronald Reagan.

Bishop Eamon Casey and Michael D Higgins were among those who protested, and maritime historian Dr John de Courcy Ireland handed back his honorary degree parchment – although he is still listed on the NUI honorary roll.

Eight graduates of University College Dublin were also reported to have burned their parchments at the protest by over 1,000 people in Galway.