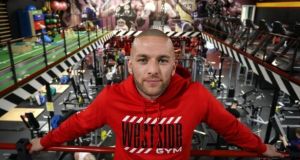 Simon Murphy, owner of the Westside Gym in Blanchardstown, who had vowed to stay open but changed his mind after gardaí spoke to him. Photograph: Crispin Rodwell

A gym owner in west Dublin who had planned to remain open on Thursday despite the Level 5 restrictions, has decided not to, following two visits from An Garda Síochána.

Simon Murphy, owner of Westside gym in Blanchardstown, had planned to open the gym to existing members only from this morning but decided against the move late on Wednesday night.

Mr Murphy said he had hoped other gyms would try to remain open which could potentially force politicians to revisit the guidelines in place for the next six weeks.

Mr Murphy said he was disappointed other gyms had decided not to and this was his reasoning in closing the gym.

“It got to the point where I’m kind of the only one in town who decided to try and raise some awareness and potentially make things change,” Mr Murphy told The Irish Times on Thursday morning.

“The precedent was there in the UK, when gyms stood together to make a change, things can actually happen.”

Gyms and leisure centres will be able to reopen across Liverpool after the UK government bowed to pressure to bring it in line with other regions under similar restrictions.

“I tried to make my point and to get other people to come with me but it’s only a movement if people move...I wasn’t looking to gain market share, that was never an objective.

“ I was genuine in what I was saying, this is a mental health issue and I do believe this will be to people’s detriment.

“For me, it’s really disappointing that other people wouldn’t stand up and try to make a change when the possibility I believe was really there.

“I knew that that was coming, especially when I was advertising what I was going to do. I anticipated that, it wasn’t a shock.”

Under the Government’s Level 5 restrictions, which came into force from midnight on Wednesday, gyms, leisure centres and swimming pools are required to close.

An online petition calling for the Government to list gyms as an essential service for the “mental and physical wellbeing of the Irish people” has been signed by more than 46,000 people.

Covid-19 vaccination in Northern Ireland can start next week – Swann 19:19
Tánaiste warns of number of ‘unknowns’ around new Covid-19 vaccines 18:27
Court to overturn permission for 660 dwellings near Battle of the Boyne site 18:27
Covid-19: A further five deaths and 270 new cases confirmed by Nphet 18:03
Child sues over catastrophic brain injury suffered in road collision 17:57