Paddy Hill and Gerry Conlan were at University of Limierick and delivered an address on their experiences as victims of miscarriages of justice. Video: Sean Curtin 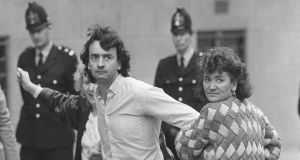 Gerry Conlon, one of the Guildford Four, after his release from the Old Bailey, London in October 1989.File Photograph: Peter Thursfield/The Irish Times. 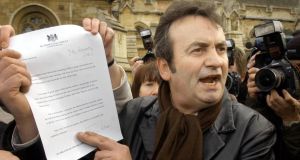 Gerry Conlon faces the media showing them the letter of apology he received from British prime minister Tony Blair outside the House of Commons in London on February 9th, 2005. File photograph: Stefan Rousseau/PA

Gerry Conlon, who spent 15 years in jail for a crime he did not commit, has died in Belfast at the age of 60.

Mr Conlon was jailed for life in 1975 for the bombing of two pubs in Guildford on October 5th, 1974 in which seven people were killed and scores injured. He had emigrated to London in 1974 and was arrested six weeks after the bombing.

Gerry Conlon was jailed along with the three other members of the Guildford Four, Paul Hill, Carole Richardson and Paddy Armstrong, in October 1975 for the Guildford bombings.

Mr Conlon’s father Giuseppe was part of the Maguire Seven, and was jailed for 12 years in 1976. The Maguire Seven, Annie Maguire, her husband Patrick and other members of her family, including her brother-in-law Giuseppe Conlon, were convicted of running a bomb factory in Kilburn. They were acquitted in 1991.

Their jailing was one of the biggest miscarriages of justice in British history along with the Birmingham Six.

Mr Conlon’s ordeal inspired the Jim Sheridan film In the Name of the Father which was a box office success in the 1990s, and starred Daniel Day-Lewis as Mr Conlon.

In October 1989 the Court of Appeal quashed the sentences of the Guildford Four after doubts were raised about the police evidence and they were set free. An investigation by Avon and Somerset Police found serious flaws in the way Surrey Police handled the case. As he emerged free from the Court of Appeal, Gerry Conlon declared: “I have been in prison for something I did not do. I am totally innocent.”

The Guilford Four received an apology from British prime minister Tony Blair in 2005.

In March, Mr Conlon gave an interview to RTÉ’s Miriam Meets programme in which he stated that every day of his torture and imprisonment was “indelibly stamped on my brain”.

“At the least drop of a hat, memories come flooding back,” he said.

He accused the British government of doing nothing to help him or the victims of miscarriages of justice after they left jail. He also said he feels guilty to this day that his father ended up in jail as a result of his wrongful conviction.

In an article in The Guardian five years ago, he wrote about his prison ordeal: “Not only did we have to beat the criminal justice system but we also had to survive in prison. Our reality was that nightmare.

“They would urinate in our food, defecate in it, put glass in it. Our cell doors would be left open for us to be beaten and they would come in with batteries in socks to beat us over the head. I saw two people murdered. I saw suicides. I saw somebody set fire to himself in Long Lartin prison.”

He said it was 13 years after he was incarcerated that the Irish Government got involved and that was only after the British media had raised the possibility of a miscarriage of justice.

Mr Conlon revealed that he had been in therapy for seven years with a trauma psychiatrist. “For the first few years, all I did was cry. I wanted to kill myself, the trauma was so deep,” he said.

He said being a prison was a form of “suspended animation” where you do not mature as a normal adult. For years, he said, he felt disenfranchised from his family.

However, he said the last year of his life had been the best and the therapy he had undergone had finally helped him to cope.

Giuseppe Conlon was jailed in 1976 for a related alleged bomb-making offence when he travelled to England to arrange a legal defence for his son. He had one lung, emphysema and had just undergone chemotherapy. He died in Hammersmith Hospital in 1980 just four years into his sentence. Eleven years later, his conviction was also overturned.

Sixteen years after the Guildford Four’s release, Mr Blair said sorry for the miscarriage of justice in a television recording from his office. “”I am very sorry that they were subject to such an ordeal and injustice ... That is why I am making this apology today - they deserve to be completely and publicly exonerated,” he told the House of Commons in 2005.