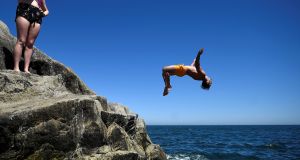 A swimmer dives into the sea at Sandycove, Co Dublin. Photograph: Clodagh Kilcoyne/Reuters 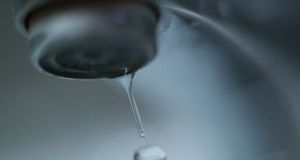 Irish Water has asked householders to conserve water as Ireland continues to experience a drought not seen for 40 years. Photograph: Yui Mok/PA Wire

A month-long hose pipe ban will come into force in the greater Dublin area on Monday in an effort to prevent the capital’s water supplies from being cut off, Irish Water has said.

The ban will cover the watering of gardens, washing cars or boats, and filling pools from public water supplies. Using a hose to fill or replenish ponds will also be banned, except where the pond contains fish.

Paddling pools can still be used, but only when filled with buckets from a tap, not a hose, and while domestic ornamental fountains cannot be filled, commercial fountains can, the utility said.

The ban in the capital comes into force on July 2nd and will initially last until July 31st but could be extended, Irish Water said.

The utility firm had earlier said there was no rain forecast in the coming weeks and water supplies were so depleted that restrictions could last into July and August at the earliest.

A temperature of 31 degrees was recorded at Shannon Airport at 5pm on Friday and similar highs were seen earlier in several other places across the west and midwest of the country.

Earlier on Friday, the forecaster extended its high temperature warning for the country. The status yellow warning is now in effect until 10pm on Saturday.

This warns of temperatures of 28 to 30 degrees and higher in some places on Friday and temperatrues of 27 degrees and above in Connacht, Munster and parts south Leinster on Saturday.

The emergency “drought order” have been introduced as the demand for water continues to outstrip supply, with usage running at more than 10 per cent above normal levels.

While the order currently applies to the greater Dublin area only, Irish Water is assessing more than 100 “at risk” water schemes around the country, for inclusion in the ban.

“It is essential that our water supply resources are conserved if we are to avoid restrictions and outages over the coming weeks and months,” she said.

“The legislation actually requires us to demonstrate that there is an urgent need for the Water Conservation Order and that it can only be applied where and when it is necessary. Therefore we are considering such orders on a scheme by scheme basis.”

Irish Water has a mandate to implement a hose pipe ban under Section 56 of the Water Supply Act 2007. The act allows for on the spot fines of €125 for those caught flouting the ban but the provision has never been used in Ireland previously.

Details of the areas covered by the hosepipe ban, and the full extent of banned activities will be advertised in newspapers and other media.

Restrictions on overnight usage had some impact in Dublin as consumption dropped from 615 million litres to 607 million litres, but demand remains 5 to 6 per cent above the norm for the capital.

Irish Water warned that at present consumption at these levels means “all headroom is exhausted and the sources, particularly Poulaphuca reservoir on the Liffey is being drawn down at a rate that puts supplies at risk later in the summer.”

It also warned that it may need to ship water to the Aran Islands in the coming weeks if the drought continues.

The bone-dry conditions has seen wild fires break out along the east coast. Wicklow County Fire Service has attended 42 gorse, forest and wildland fires over the last two days. At its peak on Thursday afternoon up to 70 fire-fighters were involved in firefighting operations at various locations in the county.

The most serious of these where located on the Military Road near the Sally Gap, at Lough Bray, at Rocky Valley in Kilmacanoge and at Windgates in Greystones.

On Friday, AA Roadwatch said that people were once again advised to stay away from the Sally Gap area due to a number of gorse fires.

Meanwhile, Clare County Council extended its “extreme fire risk” alert until midday on Monday and warned that an extreme fire risk existed in all areas where hazardous fuels were present.

Members of the public were urged to be particularly vigilant when disposing cigarette butts and using disposable barbecues in particular.

It follows the issue of a red warning by the Department of Agriculture for fires this week in forestry areas. The Department has also called for extreme care when operating agricultural machinery in dry vegetation on cultivated land.

There has been a prolonged drought on the east coast since the beginning of May with charts published by Met Éireann showing the dry spell has most acutely affected Leinster.

The soil moisture deficits range from 38mm in Donegal to 86mm in Leinster. This is the equivalent amount of rain that would need to fall for moisture levels to return to normal.

The weather station at Dublin Airport recorded just 19.1mm of rain in May, less than a third of the normal amount and to date there has been just 4.8mm of rain in Dublin in June. The monthly average is 66.7mm.

Casement Aerodrome on the southside of Dublin recorded just 16.8mm of rain in May, its driest May since 1991.

There is no end in sight for the drought. However, there is a possibility of thundery rain in the Munster region on Sunday, but the amounts falling will be small and the rest of the country will remain dry.

“For anybody looking for rain, there is not going to be large quantities,” Met Éireann forecaster Joan Blackburn said.

There is some rain forecast for the southern half of the country, most notably Munster, on Monday, Tuesday and Wednesday, but the quantities will be small and temperatures will remain high - though not in the 30s as it has been at times this week.

“The indication at the moment is that any rain will fall will be light rain. The weather has settled into this spell,” Ms Blackburn said.

She said the longer term forecast towards the end of next week is more uncertain but the models are suggesting a similar pattern and that all rainfall will be light and localised.