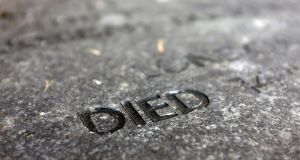 MacHutchison was one of 526,816 British army soldiers who died in the war and have no known grave. Photograph: Bryan O’Brien

Like so many parents, John and Jane MacHutchison endured the double agony of not only losing a son in the first World War, but also having no place to mourn his passing.

He went off in the direction of a captured German village in France to get treatment for a bullet wound to his head and was never seen by his own side again.

Until now, MacHutchison was one of 526,816 British army soldiers who died in that terrible war and have no known grave. He was one of the “Pals at Gallipoli”, the middle-class Dublin boys who signed up en-masse to fight in the war.

Three years after he died, his family placed an in memoriam notice in The Irish Times stating he was “missing, believed killed” in France.

On Wednesday MacHutchison will no longer be among the missing. His grave has been identified and a rededication ceremony will take place at Villers-Bretonneux Military Cemetery in the Somme region of northern France.

The Commonwealth War Graves Commission (CWGC) has determined that the “unknown Dublin Fusilier” in a grave in that cemetery is Lieut MacHutchison. The headstone will be changed accordingly.

Among those who will attend Wednesday’s rededication ceremony will be MacHutchison’s grand-niece Sandra Harper from Belfast and her son Colin. Ms Harper’s grandfather John was MacHutchison’s brother.

Ms Harper said news that her great uncle’s grave had been identified after 99 years left her “gobsmacked”.

“I feel very sad that his parents and his brothers and sisters did not know that he had a proper grave,” she said.

She has determined that the inscription on her great-uncle’s gravestone will read: “Lovingly remembered by his parents John and Jane, brothers George and John and sister Kathleen.”