The story of a missing Irish soldier

William MacHutchison was one of the famous ‘pals at Gallipoli’ 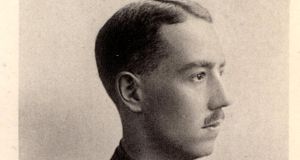 For almost 100 years Dublin-born soldier Lieutenant William Frederick MacHutchison was one of the missing of the first World War. On Wednesday a new headstone bearing his name will be erected over the grave that contained until now the body of an “unknown lieutenant, Royal Dublin Fusiliers”.

MacHutchison (24) disappeared during the German Spring Offensive of March 1918 when the remnants of the two Irish divisions fighting on the Western Front were destroyed across the old Somme battlefield.

He was one of the well-known “Pals at Gallipoli” who joined D Company, 7th Batallion of the Royal Dublin Fusiliers. These were drawn from Dublin’s middle classes. MacHutchison was from Dartry Road in Rathgar. He attended St Andrew’s College. After finishing school in 1913, he got a job with the Hong Kong and Shanghai Banking Corporation (HSBC) in London.

Shortly afterwards, a photograph was taken of him in cricketing flannels at the bank’s sports grounds at Beckenham, southeast London. The team was the bank’s second XI and was made up almost exclusively of junior staff who were training to be sent to other postings around the world.

These were young men who were destined for a comfortable life in banking. Instead the great cataclysm of the first World War intervened. By the end of the war, four of the men in the picture, including MacHutchison, were dead. Two more got caught up in the second World War in the Far East and were interned by the Japanese.

When war broke out in 1914, MacHutchison returned home to join the Royal Dublin Fusiliers. He never made it as far as Gallipoli because of illness, but was badly injured when he was shot in the shoulder in Salonika and invalided home.

In December 1917 he joined the composite 8/9 battalion of the Royal Dublin Fusiliers, eventually serving on the Western Front when he was killed.

He was recorded as having no known grave

Like the remains of more than 500,000 other British and Commonwealth soldiers who died in the first World War, he was recorded as having no known grave. His name is listed on the Pozières Memorial to the Missing in the Somme for those who died in the German Spring Offensive, among them thousands of Irishmen. He is also one of 33 men from the Wanderers rugby club who died in the war listed on a plaque in the club pavilion in Lansdowne Road.

But now, 99 years later, his last resting place has been identified by a British First World War researcher Tom Tulloch-Marshall.

The Commonwealth War Graves Commission has accepted his research that the “unknown lieutenant, Royal Dublin Fusiliers” buried in Plot XIX, Row A, Grave 6 of Villers-Bretonneux Military Cemetery is MacHutchison.

Mr Tulloch-Marshall first came across the grave in 2005 and was puzzled as the date on it was “3rd December 1918” and the war had been over three weeks at that stage.

By a process of elimination – Tom Kettle being one of them – he was able to deduce that it had to be MacHutchison.

His search was hampered by the fact that nearly every official record was wrong. It listed him as still serving in his old batallion, the 7th, though at that stage it was in the Middle East. The idiosyncratic spelling of his name (MacHutchison not MacHutchinson) did not help searches either.

Further research led to one of the last people to see him alive. Second Lieutenant John Francis Barekell recounted that on March 27th, 1918, MacHutchison was hit in the head by a machine gun bullet outside the village of Morcourt. As the Germans were advancing, his comrades were forced to retreat.

MacHutchison’s injury did not look severe but he had lost a lot of blood. The last words he uttered to the men as they left were “cheerio”.

He was escorted by two other British soldiers in the direction of the village of Lamotte which was occupied by the Germans that evening. A German medical officer later sent a note to MacHutchison’s batallion commander saying that he had died in their care, but all records were lost. He was buried outside the walls of the communal cemetery and the body exhumed after the war and reburied in Villers-Bretonneux Military Cemetery.

His family were not officially notified about his death until September 23rd, 1919 when the British Army Council wrote to his father, John, stating that they were “regretfully constrained to conclude that Lieutenant W F MacHutchinson (sic) died on or since 26th March 1918”.

He also had a fiancée, Kathleen Murphy, who worked in the Women’s RAF headquarters in Dublin. She wrote to the War Office in July 1919 asking if they had any news about him. They had no good news to report.

On the third anniversary of his death the family placed an in memoriam notice in The Irish Times. “In ever loving memory of a most dearly loved son and brother, William Frederick MacHutchison, Lieutenant, Royal Dublin Fusiliers, who passed out of the sight of men on 27th March, 1918. Missing, believed killed, at Mercourt, on the Amiens-Peronne Road, France. Bravely he passed, the great surrender made.”

On April 12th the Commonwealth War Graves Commission (CWGC) will hold a rededication ceremony to remove the old headstone and replace it with a new one bearing his name.

Mr Tulloch-Marshall says he is proud to have played his part in solving an “unsolvable conundrum” after 12 years of often frustrating research, but added: “At the same time you have to remember what this young man and his comrades had to go through. That rather tempers any inclination to get excited about the result.”