GPs will not offer new services for restoration of cuts, says IMO 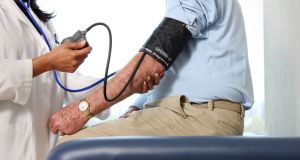 The Irish Medical Organisation is engaged in intensive talks with health service management which are “difficult and challenging”.

Family doctors will not accept having to provide additional or new services to medical card patients in return for the restoration of pay cuts, the Irish Medical Organisation has said.

The union told members in a briefing on Monday that GPs could not be treated less equitably than any other group in the public service.

It said it was currently engaged in intensive talks with health service management which were “difficult and challenging”.

It said it was seeking “to secure additional funding for a multiannual introduction of new patient services in general practice”.

The organisation said cuts applied under financial emergency legislation over recent years “will and must be reversed”.

However it said that while such a development would involve the provision of some productivity measures, its position is that “such measures are not new clinical services to patients but will focus more on the reform of structures and the move to e-health solutions on the administrative side”.

It said it would not agree to a whole new contract that will be “foisted” on GPs struggling with capacity issues.

“Such a move would ultimately lead to the further erosion of general practice with an immediate increase of obligations. What is required is a phased and planned approach accompanied by appropriate resources. What we are seeking to secure is additional funding for a multiannual introduction of new patient services in general practice,” the IMO stated.

It said that while progress had been made in some areas in the talks with health service management, there were others that remained a real difficulty.

“We hope that over the coming weeks we will be able to reach an agreement. However it is important to state that we are also prepared to walk away from any deal that is not in the best interest of general practice.”

It said there would be new funding for additional services such as chronic disease programmes along with new funding to build up nursing capacity in general practice .

“There will be issues around the extension of GP care to more patients but in a planned and resourced way. General practice cannot cope with unplanned capacity such as happened in the last budget with 100,000 new patients set to receive doctor-visit cards.”