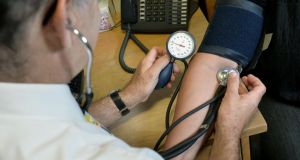 The Government recently reached a deal with the Irish Medical Organisation on the provision of free GP care for children under six. Photograph: Anthony Devlin/PA Wire

GPs have been warned that they risk breaching competition law if they share with other doctors their intentions on the Government’s new contract for providing free care for children under the age of six.

The Competition and Consumer Protection Commission said it had written to the National Association of General Practitioners expressing “grave concerns” that the organisation had been conducting what amounted to “an ongoing and escalating campaign designed to encourage its members to engage in a collective boycott of the under-sixes contract contrary to EU and Irish competition law”.

The Government recently reached a deal with the Irish Medical Organisation on the provision of free GP care for children under six.

The National Association of General Practitioners yesterday started a legal challenge to the Department of Health/HSE plan for children under six. The HSE had set a deadline of next week for GPs to sign up to the new contract. It will be up to each GP to decide whether to accept it.