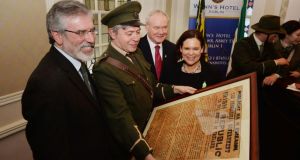 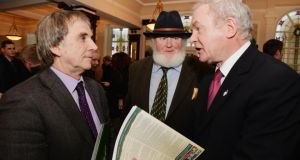 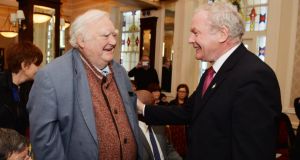 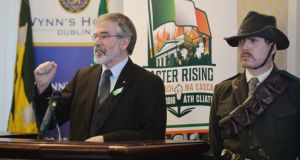 Gerry Adams at the of Sinn Féin launch of their 1916 Commemoration Plans at Wynn’s Hotel off Dublins O’Connell Street. Photograph: Alan Betson 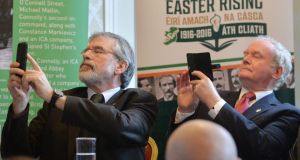 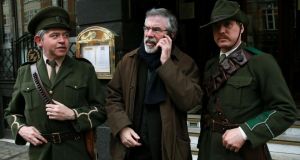 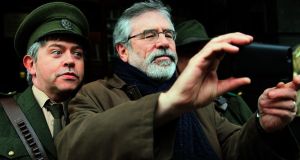 Sinn Féin has launched an alternative Easter Rising programme to the State events for next year’s centenary commemorations.

Sinn Féin President Gerry Adams said the launch of the Government’s own programme in November had been a “bad joke” and the much-criticised Ireland Inspires 2016 video has been withdrawn.

He accused the Government parties, Fine Gael and Labour, of being “embarrassed” by the commemorations and the Proclamation.

Sinn Féin has brought out its own video in response to the Ireland Inspires video which made no mention of the Rising and did not feature the Proclamation.

The 1916 commemorations will begin in August this year with a re-enactment of the funeral of veteran Fenian Jeremiah O’Donovan Rossa with a procession from City Hall to Glasnevin Cemetery, and a recreation of the famous graveside oration by Pádraig Pearse on Saturday, August 1st.

The party is funding a 33-week long exhibition at The Ambassador Theatre, O’Connell Street opening on February 27th next year.

The visitor attraction will feature a day-by-day account and legacy of the 1916 Rising through different mediums and artefacts.

The main State commemoration is on Easter Sunday 2016 which falls on March 27th. Sinn Féin will participate in an Irish Citizen Army parade which will take place on Easter Saturday next year from Liberty Hall to St Stephen’s Green.

Mr Adams said Sinn Féin also intends to participate in the State commemorations. He criticised the Government for failing to secure the buildings in Moore Street where the leaders of the Easter Rising surrendered.

Sinn Féin is marking the chronological centenary of the rising from April 24th to 29th with Son et Lumiere (sound and light) projections on the facade of the GPO using the portico as a giant screen.

Sinn Féin is working with the Citizens’ Initiative supporting The Reclaim the Vision of 1916 Celebration on Sunday 24th April, 2016, which was started by the artist Robert Ballagh.

There will be dawn vigils outside Kilmainham Gaol at 3am on each of the dates which coincide with the centenary of the execution of the leaders of the Rising.

Speaking at the launch in Wynn’s Hotel, Dublin, Mr Adams said the centenary of the Rising will be a time to “rededicate ourselves to the achievement of the politics of Wolfe Tone, of Pádraig Pearse and James Connolly, of Maire Drumm and Mairead Farrell, and of Bobby Sands. ”

Also present at the launch were relatives of those who fought in 1916. Their spokesman James Heron Connolly, James Connolly’s great grandson, said they had produced their own proposals in relation to the commemoration of the Easter Rising and believed Sinn Féin had taken many of them on board.

He said there was a “complete lack of urgency” on the part of the State as far as commemorations were concerned.

He denied that the relatives were aligning themselves with Sinn Féin. “We don’t see this as divisive in any way. Sinn Féin has taken a lead. It is now up to others to follow.

“We don’t align ourselves to any political party. We will give our support to any organisation that is seeking to save the last extant battlefield of the Rising, Moore Street.”

Mr Heron Connolly said the centenary “belongs to nobody in particular, it belongs to everybody. It should be a citizens’celebration, a coming together of all our citizens”.